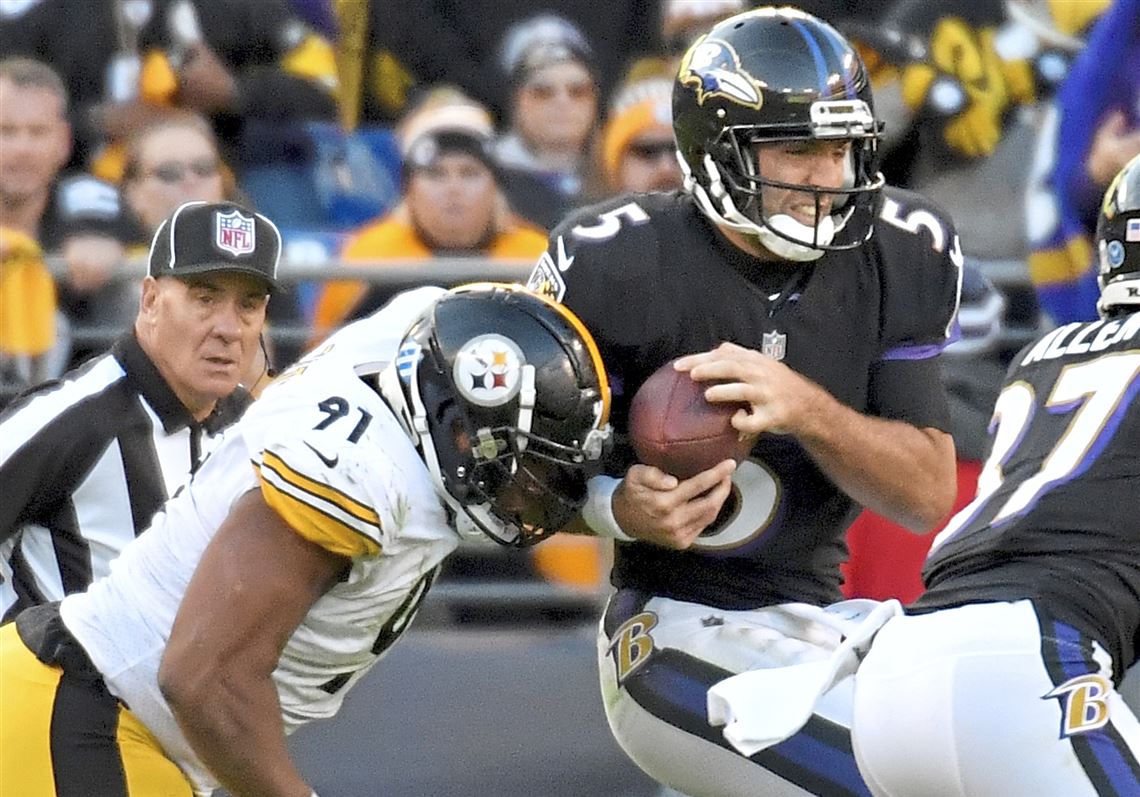 With half of the Steelers’ 16 games in the books it’s time for the second of my quarterly reports. At 5-2-1 and surging, there’s a lot like in recent weeks but there is much of the 2018 season remaining.

The offensive line, despite three starts by Matt Feiler in place of Marcus Gilbert, has been the catalyst for the improvement of Randy Fichtner’s unit. From James Conner’s success running the ball to keeping Ben Roethlisberger free of pressure, they’ve done a terrific job. The emergence of Vance McDonald and the growth of Conner as a receiver have been vital to the offense’s success. JuJu Smith-Schuster continues to be big, especially on second and third down plays. Antonio Brown is not putting up the type of numbers we’ve come accustomed to but I think that’s a positive. Big Ben is not forcing the ball to him as he has in previous seasons. That’s allowing him to spread the ball around and in my opinion is making Roethlisberger a better quarterback.

The only real concern I have for this unit right now is who claims that third wide receiver spot. James Washington has bounced back and forth with Justin Hunter in terms of who is getting a helmet each week and who isn’t. Hunter is the veteran who offers a speedier option but Washington’s ability to make combat catches makes him attractive.

In their first four games, the defense surrendered an average of 29 points per game against Cleveland, Kansas City, Tampa Bay and Baltimore. Over their last four games they’ve given up an average of 18 points per game against Atlanta, Cincinnati, Cleveland and Baltimore. That’s a pretty significant difference in a relatively short period of time. Credit should go to Keith Butler and Mike Tomlin for righting the ship so to speak. This is still not a very good overall defense but they’ve identified some things that were working and some that weren’t.

For starters, they’ve used numerous specialty packages and have mixed in and out different types of personnel. They’ve also figured out that Artie Burns was more of a hindrance than an asset. Coty Sensabaugh is serviceable but he will be picked on by the better quarterbacks that the Steelers face as the season goes on. The D has also been better due to better overall play from Stephon Tuitt, Sean Davis and Joe Haden as well. If you want a defensive MVP right now Haden or Mike Hilton would be my choices.

There are no quick fixes for this unit when it comes to upgrading the linebackers or secondary. They are rolling with what they have. But the good news is there has been marked improvement and that’s way better than the alternative.

If you know what’s wrong with Chris Boswell then please let us know. The majority of his misses are sailing right and that tells me there’s a physical issue that’s going on. The problem is that this can manifest into something mental and while I don’t think he’s there yet I worry about it going forward. Jordan Berry is what he is. He’s going to give you what you need in terms of dropping balls inside the 20 but he’s just not going to flip the field as often as needed.

I often worry about kick coverage because several times over the last couple of weeks opposing returners have had cracks that just shouldn’t be there. Danny Smith has to get those filled in. Roosevelt Nix continues to be one of the better and more consistent special teams players and his blocked punt against Atlanta is proof.

Ryan Switzer has provided both a spark in the return game and has added to the passing game just often enough. Some big plays out of him in the second half of the season would be more than welcome.

Randy Fichtner is like all offensive coordinators. He makes calls that leave us scratching our heads but he’s also done an excellent job of making this unit better in the red zone where they were sorely in need of help. He has found ways to utilize multiple tight ends and has effectively used James Conner in all games with perhaps the exception of the first game with Baltimore.

I still think there’s a very real chance that Keith Butler is removed as defensive coordinator following the season but he should be commended for improving things. He can only do so much with the talent he’s been given and I know I don’t need to tell you where the weaknesses are. He needs to continue being creative and has to rely on pressure more often than not.

Mike Tomlin always seems to know how to get his team squared away and as of this writing he’s done so again. His use of the challenge flag is still one of the most awful things I’ve seen. It’s almost like he challenges these things just to irritate us! That shouldn’t take away from the fact however that he once again has the team atop the AFC North.

As far as Special Teams’ Coach Danny Smith is concerned…. He chews a lot of gum.

When you look at the what the Steelers are facing over the next eight weeks you realize that getting to 10 wins will not be easy. It will however be what they need to do with Cincinnati having a much more favorable schedule. What Pittsburgh has done though over the last four weeks is something they can build upon. At worst, the Steelers could survive going 2-2 over the next four games. Anything worse than that would bring serious concerns about their postseason chances with the final four games being equally as difficult.

If the Steelers follow the recent pattern of ‘bend and don’t break’ defense and timely offense then they should be in excellent shape to make their December run to the postseason.

SCB Steelers’ Quick Hitters: The “Is Today the Day?” Edition

[…] delivered my quarterly report on the Steelers last night. “Grading the Steelers at the halfway point of 2018” is right here for your reading pleasure. This was much more enjoyable to do than was the […]

[…] SteelDad Grades the Steelers at the Halfway Point of the Season […]