Before I get to my thoughts on the Steelers’ win over Baltimore I want to take a second and discuss John Harbaugh. He entered yesterday with a “warm seat” according to the Ravens’ folks we spoke with and that seat is now much warmer. Should they miss the playoffs, it would be six out of the last seven seasons. He and Mike Tomlin have had a terrific rivalry and it would definitely be the end of an era should Harbaugh get the ax.

I think, despite the key injuries that Baltimore had yesterday, it was still a solid win for the Steelers. They have not traditionally played well there and Ben Roethlisberger has struggled for much of his career in Baltimore. The Ravens still play very good defense and I thought they held us in check pretty well at least on the scoreboard. My question is this… Is this current team good enough to win in New England?

At some point Le’Veon Bell is going to return. If I’m Ramon Foster, Cam Heyward and any other leader on this team I’m sitting him down, saying “Welcome back” and adding, “Don’t you dare be a distraction for this team.” Sadly, I don’t think it will matter.

Tweet of the Day… Excellent point and consider Matt Feiler has been the right tackle the last two weeks.

During #Steelers’ four-game win streak, Ben Roethlisberger has been sacked just twice. He’s thrown 8 TDs to two INTs. Meanwhile, James Conner is averaging 118.5 rush yards/game during that streak.
When you talk abt the Steelers’ offensive stars, you have to mention the OLine.

Not sure what else to say about James Conner that hasn’t already been said. Another day of over 160 combined yards and he’s now up to 10 touchdowns on the season. Listen to the comments by guys like Alejandro Villanueva and it’s clear they love blocking for this kid.

Cannot say enough about Josh Dobbs. He comes in for one play, deep in his own territory and throws a strike for 22-yards and a first down. In many situations that’s a draw play followed by a punt. Great job by him.

Coty Sensabaugh is a liability but I’ll also say this; the secondary appears to play better when he’s out there as a whole compared to when it’s Artie Burns.

Morgan Burnett has to cover better than he showed yesterday. Mark Andrews is a ‘nice’ tight end but Burnett is a veteran and has to make better plays.

Right now my defensive MVP would be Mike Hilton. His ability to cover the slot, bring pressure off the edge and tackle ball carriers has been exceptional.

I know Antonio Brown (and especially his fantasy football owners) want more opportunities but I really think the way Big Ben is spreading the ball around right now is better for this offense. Constantly trying to force throws to Brown can result in some good plays but also some ugly ones too.

There are three guarantees in life. Death, taxes and the Ravens getting calls against us for defensive pass interference. It’s literally a joke.

Besides Dobbs’ huge play the other play of the game was Joe Flacco missing a wide open Lamar Jackson in the first half in the red zone. That would have been a serious game-changer.

Speaking of Tomlin, his presser will be today with the Thursday night game coming up. 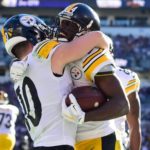 Steelers Hold Off Ravens; Maintain Lead in the AFC North 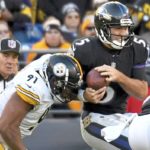