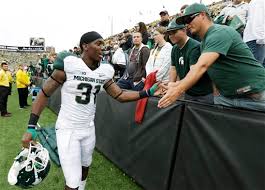 I put the question of who the Pittsburgh Steelers would take in the first round on Thursday to 21 people on Twitter I speak with quite regularly and the results weren’t exactly shocking. By a count of 14-7, the feeling was that the Steelers would choose Michigan State cornerback Darqueze Dennard with pick number 15.

What I found in the comments of most was the same thing that has troubled me when breaking down Dennard and the other top vote-getter Kyle Fuller.

My consternation has been over which guy fits what Dick LeBeau does on defense the best.

Both are talented guys who are deserving of the lofty praise they’ve received and if you could combine the two, you’d have the perfect defensive back for the Steelers’ defense.

He is more than willing to come up and support the run and I would argue is more consistent in tackling than Dennard is although neither is what I would call a “sure tackler.”

Dennard was brilliant for the Big Ten and Rose Bowl Champion Spartans in 2013. He played much more man coverage than Fuller did and was typically tasked with taking away the offense’s top receiving threat. In most cases, Dennard was so good that he effectively took away one side of the field.

Of the tapes I watched on Dennard, I thought his work against Michigan displayed the most in terms of everything he brings to the table both good and bad. You see very good man coverage skills, excellent and aggressive hands and also his inability to tackle consistently when supporting the run.

Both Fuller and Dennard like to go low in almost every way when they come up to play the run. While this isn’t a negative necessarily, there were several instances where their heads dropped and the tackle was missed.

My concern for Dennard in the Dick LeBeau defense is whether he can adjust to the zone coverage and to the complexity of the system. Conversely, I worry about Fuller picking up the defense as well, but I worry about his man coverage skills.

Fuller may be more valuable in terms of his ability to play special teams, but the upside might be greater with Dennard who if allowed, could be a shutdown corner in the NFL as he was in the collegiate ranks.

The overall picture for me comes down to two things; is Fuller worthy of a 15th pick in the first round and is it easier to teach zone or man coverage skills in the NFL?

If the Steelers can trade down into the 20’s and then grab Fuller, I’d be on board. Dennard at 15 is a no-brainer but many mock drafts have him going earlier in the draft and I don’t see the Steelers moving up.

As far as coverage ability, I think you have to go with the guy who plays man to man better because at certain phases of every game this skill is needed.

Ultimately, I believe Dennard is the better option but getting Fuller later would be just fine with me too.

I’d be happy with either player but I believe that Kyle Fuller has the experience in zone more than Dennard. I love that Dennard plays the run tough and has a good jam in press. The exception to me is if for some reason Jake Mathews was on the board you take him. It’s also hard to bypass Odell BEckham Jr.