The Pittsburgh Steelers hit the practice field for the first time in Training Camp yesterday although it wasn’t exactly the field they had been planning to use. With heavy rain pounding the grass fields of St. Vincent’s College, the team was forced to move practice to Latrobe’s high school field which handles the rain much better. The rain was far from the only issue on day one though.

Quarterback Ben Roethlisberger did his usual round of interviews at the beginning of camp and didn’t reveal anything new but created more lather to the controversy between he and Martavis Bryant. Frankly, this is a pissing match that needs to come to an end.

Roethlisberger’s only mistake in this was that he made it public. I’m of the belief that these things should be handled in-house and out of the public eye. That ship has sailed though and now things rest on Bryant. According to Big Ben, he texted Bryant “30 straight days” and received no reply. He also still contends that Bryant lied to him prior to his being suspended for a year.

I’m not going to claim I know everything that there is to know about both sides here so it’s hard to place blame on either guy. What I do know is that I’m tired of it and I’m tired of hearing Bryant talk about what a different person he is and that he’s changed. If that’s the case, stand up in front of your team, apologize and move on.

Other notes from Practice:

JuJu Smith-Schuster had the fans freaked out for a minute when he needed assistance from the trainer. Sounds like it’s just a rolled ankle but still something to be slightly concerned about going forward. Ankles can be persistent for long periods of time.

Fans have to keep their heads a bit when they see players in certain positions or playing ahead of other guys. Senquez Golson was on the boundary yesterday which would seem out of the ordinary. Remember, that’s what he played exclusively in college… T.J. Watt lined up with the first team defense at ROLB… Fitzgerald Toussaint got first-team snaps as well. That should tell you right there not to over-analyze anything.

With Daimion Stafford contemplating retirement (what in the hell was he doing all summer????) the Steelers went ahead and signed Penn State safety Malik Golden.

One highlight of the day was Antonio Brown going up against Artie Burns. Each was able to draw blood on the other in a very hotly contested group of plays. Brown also took a bit of a shot from Sean Davis too.

The team will be back at it today! 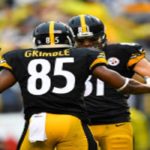