TGIF Steelers’ Fans and a special shout to those of you attending the first open practice this afternoon.

Yesterday was chock full of news from the morning right on through to the early evening as the Pittsburgh Steelers reported for camp. Antonio Brown arrived via an open-top Rolls Royce while James Harrison captained a fire truck. Jesse James showed up in a (gasp) Ford Pickup while David DeCastro hauled in his La-Z-Boy which was quite a sight.

Chances are though that you’re here for news and opinion so let me get to it.

The Steelers signed Alejandro Villanueva to a four-year $24 million deal. While they could have easily forced his hand due to him being an Exclusive Rights Free Agent, this is a very fair and frankly, ‘cheap’ deal.

Le’Veon Bell did not show as was expected. Ben Anderson wrote this piece last night explaining exactly why this isn’t a big deal.

Many were surprised to hear that Martavis Bryant will be unable to practice because he has not yet fully reinstated by the NFL. It should be just a formality but I find irritating. This crap should have been done weeks ago.

Wide receiver Canaan Severin left the conditioning test on a cart and was placed on the PUP list. As a veteran of past camps, I have to believe he had a pre-existing issue. How he could come into camp out of shape is beyond me.

If anyone knows where Daimion Stafford is please let the Steelers know. In all seriousness, Stafford was placed on the “did not report” list. Not good for a guy who comes in as a potential ace on Special Teams.

Here are a couple of names to keep an ear out for in the first week or two. Ethan Cooper and Francis Kallon. The guard and defensive end will likely raise some eyebrows early on. Can they keep it up throughout Camp is the question?

I took a ton of heat from Cowboys’ fans when I tweeted my disgust at Jerry Jones going into the Pro Football Hall of Fame. They cited his contributions to the massive TV contract, advertising in general and the explosion in stadium growth and development. You’ll notice these are all things that serve him first and foremost and that’s fine; he is what he is. But let’s not act like what Jones does has the best interests of others. As I’ve always said, I don’t agree with everything the Rooney’s do but I wouldn’t trade them for anything. 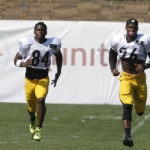 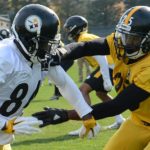