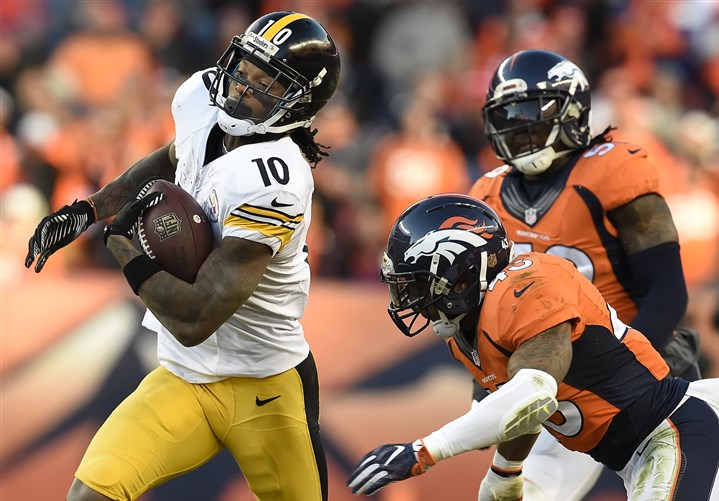 As I go back over the game from yesterday I’m finally able to clear my head a bit and think critically about some of the reasons why the Steelers lost. OK, maybe they aren’t the reasons but I don’t think they helped and they deserve to be discussed. Here’s what I’m scratching my head over this Monday.

Number One: With half of the third quarter gone and still leading 13-9, the Steelers were pinned back at their own six yard line. While I certainly am not advocating for anything crazy here in this part of the field, Offensive Coordinator Todd Haley went with three consecutive running plays. The three runs ended up gaining a grand total of four yards and despite one of Jordan Berry’s better kicks, the Broncos still had the ball at mid-field. Seven plays later, the Broncos pulled to within 13-12.

Two things about this series. First of all, Ben Roethlisberger did not audible on any of these so there was no ‘run-pass’ option here. Secondly, there were some rumors that Big Ben’s shoulder was bothering him but that hasn’t been verified. Therefore, I have to wonder why was Haley so conservative in that spot? Why not try to throw at least once off play-action at the very least? The lack of aggressiveness cost the Steelers three points.

Number Two: As I stated in my earlier article, I think Special Teams Coach Danny Smith will be let go. There are numerous reasons but one for sure is the fact that Smith had not developed a more stable replacement for Antonio Brown on punt returns. Markus Wheaton was a circus act every time he went back to field a punt.

The fact that Smith had not prepared someone more stable and consistent is troubling. While nothing Wheaton did cost the Steelers the game, there were several times where he got away with mistakes that could have easily cost the team.

Number Three: Mike Tomlin’s decision to punt at the beginning of the fourth quarter didn’t go over well on social media with many fans. I have to say I agreed with Tomlin’s decision 100%. The ball was at the Denver 39 yard line and the Steelers were heading into the more difficult part of the field. While I like Chris Boswell and believe him to have a big leg, a 56 yard field goal attempt there would have been a far less than 50% shot. As it turned out, the Broncos were forced to punt on the ensuing possession.

Number Four: With a 10-6 lead and the ball at their own 45 yard line, Todd Haley called for an end around to Martavis Bryant. Keep in mind this was on third and two. Despite great success (a 40- yard run on an earlier end around) earlier in the game, I have to question why he would use such an ‘East-West’ type play against a very athletic Denver defense.

Had this been Bryant’s first attempt at an end around I would have understood it a bit more but this seemed like classic over-kill here. Perhaps I’m being a bit nit-picky but I just didn’t see any need for this type of play here. Get the first down and keep the drive alive. Not as simple as it sounds I know, but it sure seems like a wasted opportunity to me.

The field goal would have been 51 yards not 56 yards since they took a DOG to give Berry more room. I disagree with the call but understand given the wind