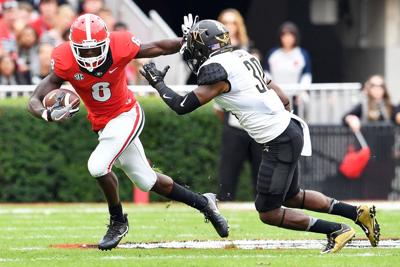 The Pittsburgh Steelers should be in the market for a wide receiver with Antonio Brown traded to the Oakland (Vegas?) Raiders. Signing Donte Moncrief was a good, heads up signing since  he has still to hit his peak. The Steelers may want to wait until Day Two to get another receiver into the mix, so today we dive into Riley Ridley’s tape, who met with the Steelers at the NFL Scouting Combine.

Has NFL bloodlines, has a brother in the NFL as a wide receiver with the Atlanta Falcons. Has an NFL build and frame to work upon. Quick, twitchy and explosive off the line of scrimmage. Electric and shifty after the catch, creates space and YAC. Runs crisp routes, no wasted movements. Nuanced route runner who can handle a broad route tree. Possesses elite balance through contact, if not wrapped up, escapability is imminent. Stops on a dime with curl or breaking routes. Creates separation with different routes in a variety of ways (quick cuts in routes, speed, release, etc). Excellent sideline awareness. Decent at the contested catch point.

This is a disgustingly good job of Riley Ridley using his leverage, high pointing the ball, and then showing off amazing body control. pic.twitter.com/XGNJusbGAC

Production and volume are quite concerning. Never caught more than six receptions in a game in his collegiate career nor has he topped 90 yards in a single game. Has a long way to go with run blocking: technique and comfortability aren’t up to NFL standards. Needs to come back to the football, can’t wait for the ball to get to him. Not many targets and receptions down field, mostly intermediate routes. Really failed in the vertical jump and 3-cone drills at the NFL Scouting Combine.

Although Ridley is a low volume, low production player, his ceiling is sky high. His quarterback often missed him create separation and become wide open, sometimes targeted Ridley with uncatchable balls. The crispness and nuance in Ridley’s routes are very attractive, as well as his ability after the catch. Rildey’s achilles heel is his run blocking, which could be taught and improved at the next level as we don’t know how much emphasis was put in this area at Georgia. I really like Ridley’s ability to play outside and could slide into the slot as well. I would target Ridley in round two to play the X, replacing the departure of Antonio Brown.