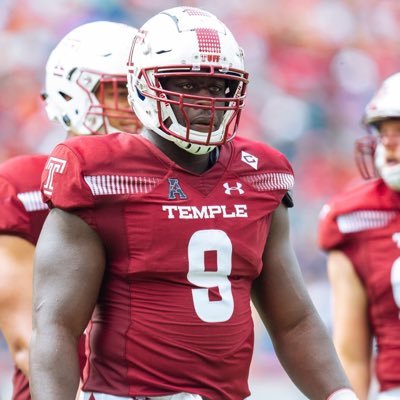 Whilst the Pittsburgh Steelers’ defensive line is one of its more bolstered units on the football field, they may still be on the hunt for an additional piece to our setup. With that in mind, Colbert and co. should look in the direction of Temple Owl Michael Dogbe.

– For his fantastic production in his Junior year, Dogbe earned the coveted rank of a single-digit number as he transitioned from #98 to #9. (This is a tradition carried by the Owls, who dedicate single-digit numbers to it’s most dominant players).

Evidently, he is a physical specimen. His gigantic frame, coupled with his leanness, allows him to combine both power and speed collectively. Dogbe utilized an arsenal of techniques at collegiate level, whilst his usage of the simplistic push and pull technique defeated numerous O-lineman. Explosive at the snap, with quick feet and solid hand usage. Has displayed ability to even shake-off double teams. Is effective in diagnosing the play-call. Motor and effort are undeniable attributes; is active from the first whistle to the last. Dogbe’s usage is incredibly versatile, being that he performed all across the D-line, having produced positive results at nose tackle, DE & EDGE.

His undersized frame for the position could be a cause for concern for certain franchises. His length could be an issue. Pass rush techniques need refined, whilst he needs to develop a plan of action after the first block. He struggles against lengthier offensive linemen, who prevent usage of his techniques. Dogbe’s production can be inconsistent, with some games he excels in and others where he struggles. This is best evidenced in his performance vs Maryland (7 tackles, 3.5 TFL & 2.5 sacks) compared to that of his production against Buffalo (3 tackles).

The biggest red flag so to speak is his aforementioned dimensions. He is an anomaly in the sense that he is in the ballpark for weight to be a defensive end, but would be on the short size. Alternatively, he is far below the average weight for an NFL defensive tackle but his height would fit well. As a direct result of this, many GM’s and coaches will be provided with the headache of nurturing his talent into one position.

Michael Dogbe was snubbed by the 2019 NFL Combine, but that works in our favor. As a result, his stock has neither risen or fallen, meaning he could be available in the later rounds of the 2019 NFL Draft. For me, he can be incredibly disruptive with the help of NFL coaching as their intuition will help refine an already significantly developed arsenal of techniques. Whilst he is yet to be the finished project, Dogbe has heart, athleticism and determination to succeed in the league, which means I truly believe he belongs on our roster and in our city. At present, Dogbe is a guy who I believe possesses loads of talent but his placement at Temple may decrease the attention paid to his talents. Moreover, the Combine’s snub of his ability will also be factored into his projection.