Five weeks from today we would know who the Steelers has selected in the first round of the 2019 NFL Draft. Will they have traded up? Traded down knowing one of those two linebackers are gone? Will they have been able to actually select Devin White or Devin Bush? These are but a few of the questions we will have answered five weeks from today. With all that has gone one since the end of the 2018 season I am more than ready for the Draft.

I’m told that we could possibly hear from Ben Roethlisberger in the coming weeks via a Pittsburgh radio station. Whether this comes to pass I don’t know. In fact I’m kind of hoping he says nothing at all then addresses it one time only when the team gathers for OTAs. After that, I hope he decides to no longer discuss the two individuals who are no longer Steelers.

Tweet of the Day… Too damn funny not to use today.

Someone actually posted this on Facebook yesterday… “Big Ben is the reason AB and Bell left. He wanted all their money for his new contract.” I swear I can’t make this stuff up.

Happy Birthday to one of the nicest people on social media, Bob Lazzari. Along with Chris Mascaro, they host the “Thursday Night Tailgate” Podcast which features a ton of former NFL players from years gone by. Many former Steelers like Greg Lloyd, Levon Kirkland, Craig Colquitt and many more have been on. If you’re an older fan like me you don’t want to miss these shows. Really, really good stuff.

It looks like Instant Replay may in fact get a few tweaks after all as the owners can trump the Competition Committee which to this point has done nothing to address some of the issues. I have the solution! Ban all instant replay reviews except for scoring plays. Done.

The Steelers had a presence at Pro Days at West Virginia, Georgia and Notre Dame this week. This is standard ‘due diligence of course but I’d like to point something out. When Mike Tomlin and Kevin Colbert are at the same Pro Day this does not constitute ‘bringing the house.’ When a team ‘brings the house’ to a Pro Day that means the Head Coach and General Manager for sure but it also includes position coaches who will often put prospects through their own drills. The ‘house” could also include scouts being there as well.

The fact that there is a debate raging about Tom Izzo of Michigan State yelling too aggressively at one of his players tells you all you need to know about society today. 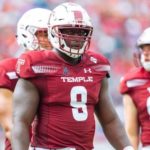