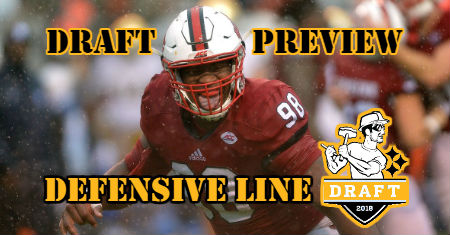 With fewer than two weeks remaining until the NFL Draft, we’ll be taking a position-by-position look at the Steelers roster and where the team has the biggest needs. Despite winning the AFC North Crown and finishing an over-ruled catch (that is now a catch) away from being the #1 seed in the AFC, the Steelers have plenty of needs to address on their current roster. While some believe the Steelers need to focus exclusively on defense in the upcoming Draft, the team has generally split their draft picks between offense and defense. The Steelers will have 7 picks in the draft with no picks in the 4th or 6th round but with 2 picks in the 5th and 7th rounds. Today’s preview will cover the defensive line, which was also covered on Episode 67 of the Steel City Blitz podcast (along with QBs and TEs).

The top four players on the defensive line depth chart are fixed. Cam Heyward and Stephon Tuitt are both on long-term deals and are going to see the vast majority of snaps, both at the DE spots in the traditional 3-4 base and as the 2 DTs in the nickel package. Since the Steelers play in nickel over 70% of the time, the need for a true 2-gapping nose tackle is vastly diminished. Javon Hargrave has shown the be capable of slashing in and using his athleticism to get into the gaps and disrupt the pocket, but he can also get blown off the ball in run situations and doesn’t bull rush his way into blowing up the pocket. Tyson Alualu is the top backup to Heyward and Tuitt and actually out-performed Tuitt last year (though Stephon was dealing with the lingering effects of his Week 1 injury for most of the season). LT Walton is a rotational player and Daniel McCullers was re-signed to a 1-year deal for some reason. McCullers doesn’t bring much besides just being a large human, and his spot at NT is the one the Steelers are in most need of upgrading.

Potential Prospects: The Steelers have not spent much time with the top defensive line prospects in the draft, but it is possible that as many as 4 are taken in the first round. As always, given that the Steelers don’t have a huge need for a defensive lineman, the more that are taken in the first 27 picks the better it will be for the Steelers chances to land a player at a position of need. Washington’s Vita Vea, Alabama’s DaRon Payne, Michigan’s Maurice Hurst, and Florida’s Taven Bryan are considered the top prospects.

Three defensive linemen have visited the Steelers, North Carolina State’s BJ Hill who is a likely Day 2 pick, and likely Day 3 picks Bilal Nichols (Delaware) and Greg Gilmore (LSU). All of these players are interior 1-tech nose tackles that have some athleticism. The Steelers seem to be scouting players to challenge Daniel McCullers at the nose tackle spot where they may only see the field in obvious running situations. The Steelers do need to get stronger in the middle of the line, and other potential Day 3 prospects include fellow NC State linemen Kentavius Street and Justin Jones, along with UConn’s Folorunso Fatukasi and Miami’s Kendrick Norton. One player that has shot up draft boards in the last month is Sam Houston State’s PJ Hall who had an explosive workout at the Bearkats Pro Day after not being invited to the Combine. Hall is a similar size to Javon Hargrave with a more athletic profile and faster times at nearly all of the speed and agility drills. 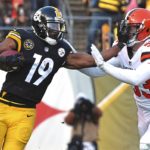 […] needs at inside linebacker, safety, running back, and cornerback. They have spent some time on depth defensive linemen and wide receivers. They have also scouted the second tier of quarterbacks (specifically Mason […]

[…] The 2018 NFL Draft is upon us and it is time for year-end positional rankings. This is my personal opinion on where I currently rank defensive players.  These rankings are not in any way predicting where a prospect may or may not be drafted. Included in this list are profiles done for certain prospects along with a position preview for each position. Happy NFL Draft, all. Interior Defensive Line (Steelers Draft Preview) […]