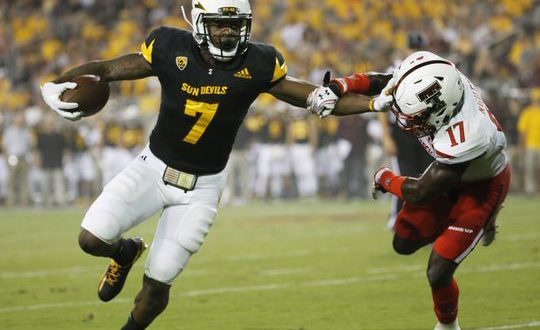 With Le’Veon Bell’s contract antics going wild, we should not expect the superstar running back to return to the team after the 2018 comes to a close. The Pittsburgh Steelers should be proactive in searching for a potential successor. Today, we take a look at an intriguing prospect in Kalen Ballage.

Background: Clocked with the fastest maximum speed among running backs at 19.42 MPH. Fell just one touchdown shy of cracking ASU’s all-time top-five for rushing touchdowns. Listed by Rivals.com as the sixth-best athlete prospect in the country and a four-star recruit. Has NFL bloodlines.

What’s to like: Prototypical body type for the position. Athletic freak. Hits open gaps quickly and with burst. Has some power to his game. Has experience as a kick returner. Very comfortable catching out of the backfield or split wide. Keeps feet churning through contact. Has a knack for the endzone. Suprisingly a nuanced route runner. Most success running between the tackles.

Concerns: Not a ton of production. Lost his starting running back job in 2017. Questions about his lateral agility. Runs upright, needs to learn to run lower to keep center of gravity. Vision leaves a lot to be desired as he leaves open running lanes unused. Can be stiff in his cuts. Indecisiveness at the line of scrimmage is troubling, leads to tackles for loss. Minimal success bouncing runs to the outside.

Verdict:  Ballage’s best route for success at the next level will hinge on the team’s offensive line and how they plan to use him. I have some concerns about the Arizona State product’s ability to be a bellcow in the NFL. He may be used as a utility back, third down back and/or as a special teams weapon. I don’t believe Arizona State’s offense suited Ballage and with proper coaching and a skilled offensive line, he will be a better pro than college football player. High ceiling, low floor prospect. Ballage could be under drafted and pan out to be a huge steal, or could end up just being a swiss army knife weapon. For the Steelers, Ballage would be the 3rd running back on the depth chart, serving as a weapon who can be lined up in the slot and be a returner on special teams. If Le’Veon Bell were to leave after the 2018 season, Ballage and James Conner could battle for the starting running back position if one is not brought in to be the bellcow.