I’m sure many of you remember going to the store to purchase a new football at some point in your childhood. The allure of the “football with kicking tee” combo was often too much to ignore. Sometimes it was just a plastic tee that your dog would devour in the first days of you having it but then there was also the those sturdier, orange rubber tees. These had a little more lasting power and were often needed to commence any backyard or neighborhood game. Its’ sad therefore that the NFL is looking to do away with kickoffs. This was coming you know? Evidence revealed what many of us already had surmised. Concussions were five times more likely to happen on a kickoff than any other play in a game. Football is often referred to as a “collision sport” and this play was the most indicative of that. The game is changing and sometimes it’s for the better and sometimes it’s not. What I do know is that it has become nothing like the game I grew up with and while sad, I get it. I don’t like it, but I get it.

I’ve finally reached the point to where I’m done with Le’Veon Bell. He’s been a terrific player for the Steelers when not injured or suspended but his most recent demand of $17 million per season is insane. We looked at the numbers and discussed this heavily on the Steel City Blitz Steelers Podcast 65 presented by 26shirts.com/Pittsburgh last night. I encourage you to listen to some great Steelers’ talk.

Tweet of the Day… Vince Williams with one of the more accurate tweets of all time.

With the new “leading with the the crown of your helmet” rule leading to possible ejections, the NFL has to explore increasing the size of gameday rosters. I suspect they will be very attentive to this rule meaning guys will be ejected early and often.

The owners, including Art Rooney II have all mentioned that they’ve had good discussions about the National Anthem and what is to be accepted and what isn’t. I suspect a formal decision will be made at the next Owners’ Meetings later in the Spring.

We’ll be doing a series of “mini-podcasts” as we ramp up our Draft coverage. We’ll hit each position, discuss the Steelers’ needs and talk about the players likely to be there. 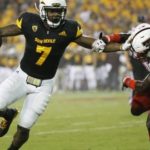