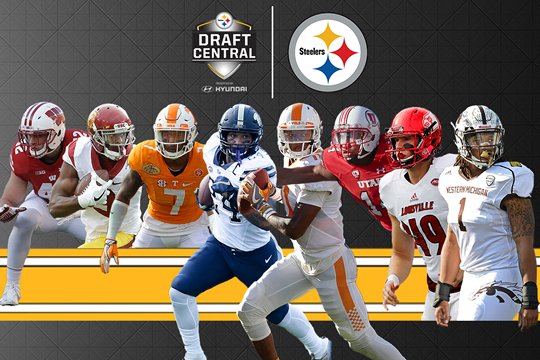 This will be my second year doing this exercise and it is one of my favorites. I first found it at WalterFootball and credit to him and his site, but now I imitate his format and place my own spin on it. This is called a Rookie Forecast, in which I will use labels to predict how the rookies will pan out. This year, I am doing things a bit differently and including every drafted Steelers player, not just the applicable ones. Last year’s Rookie Forecast can be seen here.

TJ Watt – I think Watt’s pathway to being a starter is pretty clear. The Steelers drafted him in the first round to be their starter at the outside linebacker position. In 2017, I think he is placed in a rotation with James Harrison and will be used mainly on run downs and situation. Later in the season in 2017 there is a possibility of him taking the starting role solely and running with it, but it really depends on how he fares on him limited playing time, and practice. 2018 is when I think Watt will be the undisputed starter. He will have more experience under his belt and will have a much better feel for the game.

Others who fit this category: JuJu Smith Schuster

Colin Holba – If Holba fails to defeat the incumbent and undefeated Greg Warren, he will be cut. Holba was drafted in the sixth round and that is when the Steelers hit on many of their players. If Holba is cut, the draft pick will surely be labeled as a waste.

Others who fit this category: Cameron Sutton

JuJu Smith Schuster – JuJu is only 20 years old, the youngest drafted in the NFL Draft since 1979. The scary thing is..he’s not raw. He has experience and his play is advanced for his age. Once the dust clears in a few seasons, we will really be able to see how JuJu has grown as a player. His work ethic and passion for the game will go a long way, see Antonio Brown. We might not love this pick now because it wasn’t a need, but down the line we will be extremely excited to have this guy.

Brian Allen – Allen is an older prospect at 23 years old, but he is raw. He has the size and speed to be a defensive back in the NFL. The cover and tackling technique needs to come along as he progresses. Allen has the ball skills, pattern recognition and aggressiveness to be a really good player as long as the Steelers are patient with him and he doesn’t get ousted by the process (beat out in training camp or poached off the practice squad).

Others who fit this category: TJ Watt

Cam Sutton – I was going to place Sutton in the bust category because of his lack of aggression and physicality, but his football IQ, ball skills and versatility may be enough to keep him around and provide solid depth. If Sutton can’t crack the starting lineup, he may be deferred to being a backup. He can play inside or outside and maybe return punts if asked to. This team can’t have enough guys like Sutton, especially as depth.

James Conner – Conner has been dealt a workload in his college career but im not convinced his skillset translates into the NFL as an every down starting running back. Since Le’Veon Bell has yet to put together a full season, whether it be due to suspension or injury, Conner was drafted to be Bell’s backup. Conner has the skillset, ability and talent to supplement, spell and spot start for Bell. This is his duty for the next four years. Aside from DeAngelo Williams, the drop off of talent from Bell to the next in recent years has been steep. Remember the playoff game against the Ravens at Heinz Field? I do, I was there. Isaac Redman was the next man up and he was disappointing. They’re avoiding that steep drop off here with Conner. He is excellent depth that can play special teams while staying a contributor on offense.

Joshua Dobbs – His situation in Pittsburgh is either going to be perfect, or daunting. Dobbs is the number three right now behind Hall of Famer Ben Roethlisberger and clipboard holder Landry Jones. Dobbs’ growth and progression as a player was mainly due to his playing time and experience as he was getting better every game. Until Landry Jones is out of Pittsburgh it is going to be tough to develop Dobbs. With the weapons and great offensive line he would/will have, it should make it easier for him to play at a higher level. I do not think Dobbs is the heir to Roethlisberger, but I do think he’ll make an excellent career backup who can spot start. If you haven’t seen his Gruden QB Camp video, go to YouTube and check it out, it’s really great.

Keion Adams – Being drafted in the 7th round and becoming a star or even a starter is a tough trek. Of course many have overcome these intimidating odds, it is just uncommon. Raw, smaller school, late round guys like Adams are drafted for depth and upside, to maybe be able to spot start at some point. Adams has great athleticism and his pass rush moves are advanced for someone of his stature. I think he is a perfect practice quad candidate until they sort out Arthur Moats and Anthony Chickillo’s future roles. They may want to go with a younger, more athletic guy like Adams in the future. He is depth and not expected to be much more, but if he is, excellent.

Others who fit this category: JuJu Smith-Schuster

After analyzing, predicting and labeling the 2017 Steelers draft class, it is apparent to me that many guys were drafted with upside but mainly as depth and to provide competition. You may not see a ton from this class in 2017 in terms of snaps and playing time like you did in 2016 with Artie Burns, Sean Davis and Javon Hargrave. That is perfectly okay. Selecting so late in the draft has its perks (having a great season prior) and its disadvantages (not having many prospects available to choose from). Selecting at 30, the Steelers did not have much of a choice than to fill needs while providing talented competition to bolster its talent level, so when there are injuries, the drop off isn’t steep. This comes in handy come playoff time. If you agree or disagree with me, please let me know in the comments! We can talk it out.

[…] This is called a Rookie Forecast, in which I will use labels to predict how the rookies will pan out. For the past two years, I am doing things a bit differently and including every drafted Steelers player, not just the applicable ones. Last year’s Rookie Forecast can be seen here. […]