2013 Likely to be the Last for Steelers’ Keisel 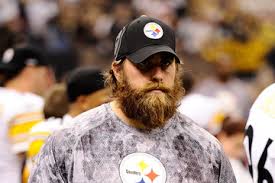 This period of the season is difficult for we bloggers/writers to find enough material to post articles on but I haven’t found that to be the case this year with so many contractual situations on the horizon for the Pittsburgh Steelers. Over the last week, I’ve detailed my opinions on whether Ryan Clark and Emmanuel Sanders should be extended into the future and that will continue for the next few write-ups.

Today’s topic is Brett Keisel and there really isn’t any drama here because I see very little reason to bring him back. He will turn 35 years old in September even should he be healthy, I don’t see his return as a good investment for the Steelers. Now if, like they could do with Clark, both sides agree to a one-year deal then I can see it just a bit and the only reason would be because Ziggy Hood is also a free agent after the season and Cam Heyward hasn’t exactly been great at the defensive end position either.

So if you’re asking me if I think Keisel will be back in 2014 I would say ‘no.’ Only in a very dire emergency type situation would I endorse bringing him back and that’s nothing personal against Keisel, it’s just that at 35 his time has come.

Brett Keisel has always been one of the good guys in the Pittsburgh Steelers’ organization and despite some less than huge numbers in recent seasons, he will be missed. Keisel will never be mistaken for former Steelers’ defensive end Aaron Smith who was one of the all-time great 3-4 ends, but Keisel can hold his own against the run and pass.

The former BYU Cougar has been a poster boy in terms of how NFL players should be on and off the field and that leadership isn’t easily replaceable but the time is now as the Steelers youth movement is clearly underway.

I can’t help but wonder if Keisel was sometimes a victim of his celebrity due to his enormous facial hair growth that has itself grown into a very marketable enterprise for him. Much like I’ve taken Ryan Clark to task for spending as much time doing television as he has I’ve done the same with Keisel. The difference is that much of what Keisel does is in the name of charity and that can’t be over-looked. Either way, the constant ‘beard’ promotions have grown tiresome with many fans.

Keisel registered 4.5 sacks last season and a total of 46 tackles. As most of you know, the defensive ends in the Steelers’ 3-4 system are not going to be ‘numbers’ guys but Keisel struggled at times last year getting pressure and for whatever reason he doesn’t seem to distract quarterbacks with his size the way he did in previous years by getting his arms in their throwing lanes.

What I’ve always been intrigued by is that Keisel seems to have two fan bases. He has one that appreciates him for his ability on the field and an entirely different one that loves him because of the beard. I don’t blame him for that, but I think more casual fans get caught up in the ‘fear the beard’ mentality rather than understand how good or bad he plays on Sundays. Such is life in pro sports today however…

Keisel has been a very solid Steeler since he joined them as a seventh round pick in 2002 and that’s a credit to him for hanging on so long for being chosen so late in the draft. In what I believe to be his final year in the black ‘n gold, I hope teams are ‘fearing the beard’ because of his play more so than his facial hair.

2013 Likely to be the Last for Steelers’ Keisel was last modified: June 26th, 2013 by steeldad
Brett KeiselNFLPittsburgh SteelersZiggy Hood

Are The Steelers Ready for a Gay...

Will Steelers Find a Way to Keep...

[…] favor are his durability and the fact that there appears to be little competition for him. Brett Keisel is likely done after this season and Cam Heyward hasn’t proven himself worthy of a first round pick yet […]

Brett Keisel’s contribution to the NFL, charities and putting (Greybull, Wyoming) on the national map again go beyond reproach! We are most certainly proud of him.
Terry Davis

No question about it. Keisel has been a great Steeler for much longer than anyone could have thought. Thanks for reading.