Pittsburgh Steelers’ General Manager Kevin Colbert spoke to a ‘select’ group of media members yesterday for the first time since the team’s premature departure from the playoffs. I’ll get to what I agree with Colbert about below but as for his comments about Le’Veon Bell… “Our goal is to be able to sign him to a long-term deal,” said Colbert. He went on to say he is “confident” that they will sign him to a long-term deal. This is ‘coach, GM, and owner’ speak. It’s lip-service is what it is but then again, what do you as a fan expect? Do you really think Colbert is just going to come out and say, “Yes. We are signing him. That is all?” If you’ve been a fan long enough then you know this already. It’s ‘blah, blah, blah’ and move on.

Now for some things I really liked hearing from Colbert…. “We weren’t good enough.” He’s right. The Steelers weren’t good enough and he went on to say that personnel changes are coming. That might not be a surprise but he isn’t usually as demonstrative as he was about it. The defensive line needs depth… Inside linebacker could (and likely will) be addressed in free agency… And while he didn’t mention names, I continue to think Mike Mitchell has two options. He’s either taking less money or he’s going to be cut. I’ve been saying this for awhile and I can see it coming.

Check out the special edition of the Steel City Blitz Podcast presented by 26shirts.com/Pittsburgh. You do not want to miss Ian break down which teams are headed for the Big Dance if you’re a college basketball fan!

Tweet of the Day… This kid has such a terrific imagination.

Told my mom last year that I’d go back to school since I left USC early. I went back to college today. pic.twitter.com/yHnbwnsELH

Bob Labriola of steelers.com said this week that the team expects to get a sixth round compensatory pick for Ross Cockrell. The former Steeler played much more for the New York Giants than most would have thought which means the Steelers now have that sixth round selection in the draft that they otherwise did not.

That extra pick does not change my opinion of drafting a QB. The Steelers need to build depth on defense from the defensive line to the secondary and this gives them one more opportunity to do that.

Former Steelers’ Punter Craig Colquitt who won Super Bowls XIII and XIV with the team is now on Twitter. Check him out @craigcolquitt. 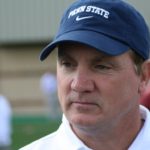 It’s the off season so here i go off topic. The Steelers aren’t very good at running the football. L. Bell may be over-valued as a team we ranked 20th in rushing, James Conner is our #2 and he only had 32 rushes. We average under 4 yards a carry that’s not good and it should be better considering we have no less than 5 pro-bowlers involved in the process when Bell runs it. To me using 1/2 of Bell’s 15 million we could easily sign 2 very good RB’s and have money left over for a high quality ILB [Bowman]. That would improve the overall roster and remember are we great because of Bell or vice – versa. P.S. i like Vander Esch but as a late 2nd rounder