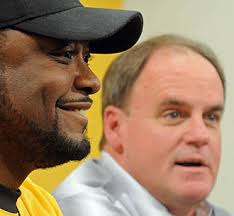 Yesterday in the Steel City, Pittsburgh Steelers’ General Manager Kevin Colbert and Head Coach Mike Tomlin sat down for their annual ‘pre-draft press conference’ which is always as entertaining as watching the grounds’ crew fill in muddy patches on Heinz Field.

These pressers are very standard and by nature are not going to divulge much in the way of information. None of the 32 NFL teams want to tip their hands as to who they are targeting in the draft and this is very understandable from a draft strategy point of view.

Colbert and Tomlin also mentioned that both Casey Hampton and Max Starks are not completely out of the picture yet in terms of possibly returning to the team. This announcement was a bit surprising especially in Hampton’s case but considering the current lack of depth at the nose tackle position it may be warranted.

We were also updated on the health of Pro Bowl tight end Heath Miller. According to both the GM and the coach “there is nothing new to report.” The same was said for injured linebacker Sean Spence as well.

There were however two statements that came out of the presser that I found particularly alarming despite the fact that neither should have really been all that far out of left field since this is how these guys talk.

Kevin Colbert said of potential draft picks, “I don’t envision anyone coming in and being an impact in Year 1.” Really? You have a team that is rapidly aging before your eyes, a tremendous lack of depth and few offensive play-makers yet you don’t expect any draft picks to make an impact?

This line of thinking makes me ill. With all of the rookies that have had an impact in their first year of professional football over the last few years, this statement makes me wonder if it really is 2013 or  if it’s 1913…

The Steelers need guys who can contribute now. Not next year or in three years, but now. They no longer have the depth and youth at positions to be able to afford the “let them learn” approach.

The other statement made by Colbert was in regards to the seriousness of this draft for the Steelers in relation to past drafts. “This draft is no more critical than other drafts for the Steelers.” For a guy to claim there are potential starting players in the first three rounds of this draft as he did in the presser and then to say that makes no sense to me.

Count me as one who has admittedly overreacted to an 8-8 season coming on the heels of an embarrassing playoff loss the year before, but I see cracks in the foundation right now and I know I’m not the only one. The House of Steelers has always been strong but that doesn’t mean it won’t need improvements from time to time and right now is a time.

The fact is that this draft is critical for this team not just for this season but for perhaps the next three to six years and maybe beyond. Colbert cannot afford too many swings and misses in this draft or else it will be his job, not Tomlin’s on the line.

I’ve been around long enough to know that ‘GM speak’ and ‘coach speak’ are part of the press conference paradigm. Colbert doesn’t want to inflame the fan base any more than it already is so I get why he is minimizing things. While there many who are fans for just a few months out of the season, there are those of us who talk and study ‘Steelers’ 365 days a year so we are allowed to be miffed occasionally when this type of ‘speak’ is thrown at us.

I just hope that both Tomlin and Colbert, behind closed doors, realize just how important this draft is for not just them but the future of the franchise over the next several years. And that’s not ‘coach speak’ either.

If the Steelers Go Defense in Round One, I Like Vaccaro

Harrison Being Released is Painful, But Correct

Do you actually think the decision makers in Pittsburgh are going to answer those types of questions honestly? Really? After all of the years of winning, this group has now lost the ability to make the necessary decisions in order to put a Superbowl-contending team on the field?! You know better then they do?! OK. Let’s do this…

…This is an organization that hasn’t had a loosing season since 2003, has gone to 3 Superbowls in 9 years and won two of them, has a wealth of great to good players and has managed to maintain a continued level of success, has a coach that in his first six years has never had a loosing season and has two appearances and already one win in Superbowls, has a great franchise QB, a sound, extremely well-run front office and a third generation owner running the franchise. The Steelers are the standard in the NFL. This is not an opinion, it’s just fact.

Now, for those of you who have wildly overreacted (embarrassingly) to the past season of 8-8, take a minute and think… if you asked a Jets fan if he/she would trade the last 6 seasons, what do think he/she would say?! Yep. You know the answer. What’s great about being a Steelers fan is the simple fact that we route for the best organization in the NFL, and arguably, one of the best franchises in all of sports. You people need to remember this. This organization knows how to do business, and yes, mistakes are made. What separates Pittsburgh from almost all others is the fact that the next year, they go back to the same formula that has been proven to work; build through the draft, no big signings…etc.. Sorry, but you don’t know more then they do. You just don’t.

‘If it ain’t broke…’, and regardless what you all have to say… the sky is not falling.

Relax. They know what they’re doing.

Thanks for reading Mary. I can’t disagree at all with your line of thinking about the past. My concern is for the present and future of the organization. We can argue all you want to about being embarrassed by an 8-8 season, but many of the losses were just that, embarrassing. Yes there were injuries but every team has them, can’t be an excuse.

As you pointed out the Steelers have used a very successful formula for a long time but the lack of depth is a result of poor drafting in recent years. That is where my concern is at the current moment because I’m in no hurry to repeat the 1980’s.

I’d be more than happy to eat crow if the Steelers bounce back with a big year:)