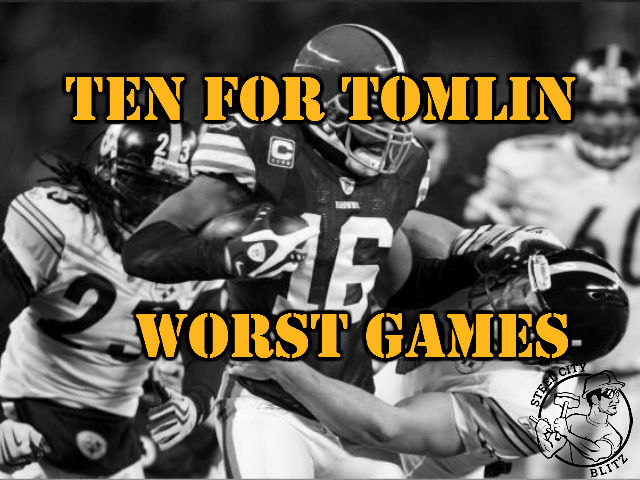 The 2017 Season will be Mike Tomlin’s 11th as the head coach of the Pittsburgh Steelers. With his decade at the helm, he is currently the fifth-longest tenured coach in the NFL. Only Bill Belichick, Marvin Lewis, Mike McCarthy, and Sean Payton have been in their respective positions longer than Tomlin. As we count down the days until the start of Training Camp and the start of the 2017 season, we’re taking a look back at Mike Tomlin’s 10 year tenure as Steelers head coach. The “10 For Tomlin” series will be 10 posts each featuring 10 items from the past decade. We started by looking at key statistics and recapping the best games. Today, we flip the coin and recount some of the worst games of the Tomlin era. These are the worst games, so beware of bad memories ahead.

The Mud Bowl. This is the only game on the list which the Steelers won, but it was still a downright terrible football game. Heavy rains coupled with re-sodding the field shortly after the WPIAL Championships turned Heinz Field into a slogging mud pile. The lasting image from this game is a punt getting stuck in the mud. The Steelers controlled field position for much of the game but could not find points against the winless Dolphins. Jeff Reed kicked a field goal as time expired to give the Steelers the victory.

The Anthony Smith Game. The Patriots rolled into early December with an undefeated record and were eyeing a perfect season. Second-year safety Anthony Smith famously boasted in the lead-up to the game that he “guaranteed” the Steelers were going to win. Brady and the Patriots took it to heart, picking on Smith all game and torching him for multiple scores. The coup-de-gras came on a flea flicker late in the game that Smith was totally lost on.

The Return of Louis Murphy. After burning the Steelers in a game against Oakland five years prior (more on that in a minute), Louis Murphy returned as an overlooked down-the-depth-chart receiver for a Bucs team that had Vincent Jackson and Mike Evans (with Mike Glennon at QB). The Bucs jumped out to a 10-0 lead after Ben was strip-sacked at his own goal line. The Steelers were able to battle back as Antonio Brown caught two touchdown passes, including a juggling Lynn Swann-esque grab to put the Steelers in front 17-10. The teams traded touchdowns in the third quarter and the Bucs cut the lead to 24-20 on an early fourth quarter field goal. The Steelers got the ball back with under 2 minutes to go and needed one first down to end the game but weren’t able to get it and had to punt with 40 seconds left. FOX infamously ran a graphic showing the divisional standings as if the Steelers had won. But Louis Murphy hauled in his 6th catch of the game on an in-cut and scampered 41 yards into the red zone. Three plays later Glennon hit Vincent Jackson over Will Gay for the game-winning score with 7 seconds left on the clock. The Bucs finished the season 2-14 and had the #1 pick in the following draft.

The Original Louis Murphy Game. The Steelers had lost 3 straight including back-to-back overtime defeats in Kansas City and Baltimore (the latter being the Dennis Dixon Game). They welcomed the 3-8 Raiders to Pittsburgh who trotted out Bruce Gradkowski at quarterback. The Pittsburgh native put on a show, throwing for 308 yards and 3 TDs. In the fourth quarter, Gradkowski led the Raiders back from 10-6 down and traded touchdowns with Roethlisberger, throwing 3 in the quarter with the final two going to Louis Murphy. The first was a 75-yarder to Murphy followed by an 11-yarder with just 9 seconds left on the clock to give Oakland a 27-24 lead. The Raiders offense hadn’t broken 21 points all season and the Steelers let them go 88 yards in just over a minute to win the game. Ben got a shot at a Hail Mary which hit Limas Sweed in the hands but Sweed wasn’t able to come down with it (shocking, I know).

The Steelers broke their playoff drought in 2014 but also lost to two of the worst teams in the league in Tampa and New York. The Jets finished just 4-12 and the score of this game was closer than the actual game thanks to a late touchdown. Michael Vick led the Jets to a 17-0 lead in the first half that was only broken by Shaun Suisham’s 53-yarder to end the half. The teams traded field goals but the Steelers weren’t able to threaten the end zone until Martavis Bryant broke free on an 80-yard bomb with a minute and a half left. The Steelers only had one timeout remaining and had to try an onside kick (which failed). The late TD to Bryant made the score look closer than the game was as the Steelers got rolled by a one-win Jets team.

Losing to the Ravens is always bad. Losing to the Ravens in the playoffs at Heinz Field is even worse. The Steelers were scrambling a bit coming into the game as Le’Veon Bell had gone down with an injury the week prior and they were forced to sign Ben Tate off the waiver wire to fill in. The game was close at halftime as 3 Shaun Suisham field goals kept the Steelers down by just a point. The Ravens stretched their lead to 20-9 on a field goal and touchdown in the third quarter. The Steelers showed signs of life as Ben hit AB at the goal line but the touchdown was overturned upon review. Ben hit Martavis two plays later but the two-point try failed, making the score 20-15. From there, the Steelers fell apart with Ben throwing two picks and Heath Miller fumbling over the last 3 drives. One interception resulted in a touchdown and the other was in the end zone and prevented a score. The lasting image from this game was Troy Polamalu’s shocked depression on the Steelers bench in what would be his final game as a Steeler.

Rock bottom. After back-to-back 8-8 seasons where the Steelers missed the playoffs, they stumbled out of the gate in 2014 with a 2-2 start where they lost to the Ravens and a terrible Tampa team. Their wins included an opening week victory over Cleveland where they nearly blew a 27-3 halftime lead. Five weeks later they went into Cleveland and got absolutely rolled by the Browns. The Browns. The Steelers lost to the Browns by 21 points. After consecutive 8-8 seasons, starting 2014 with a 3-3 mark that included the bad loss to Tampa and getting dominated by Cleveland was absolutely the rock bottom point of Mike Tomlin’s tenure. Thankfully, the Steelers turned it around when Lawrence Timmons started blowing chunks the following week against Houston and they went 8-2 the rest of the regular season.

The Tim Tebow Game. The Steelers finished the regular season at 12-4 but because they lost both games against Baltimore were forced into a Wild Card game. They had to travel to Denver to take on the 8-8 AFC West Champions who were led back from a 2-5 start by Tim Tebow’s improbable run. The Steelers took a 6-0 lead early but surrendered 20 straight points in the second quarter. The Steelers would battle back and tie the game at 23 in the fourth quarter and have a chance for a Game Winning Drive in the closing minutes. Ben got the Steelers into Broncos territory but was sacked twice, sending the game to overtime. On the first play of overtime, Tebow hit Demaryius Thomas on a post route that Thomas took across the field and through the defense all the way to the end zone. This was a brutal loss for the Steelers who had their eyes set on another run at the AFC title and became a lasting memory as they wouldn’t taste the postseason again for three years. If you’re like me you probably still have nightmares about Demaryius Thomas running untouched through the Steelers secondary.

The Baltimassacre. For as bad as the conclusion of the 2011 season was, the start of it was worse. The Ravens had been bested by the Steelers in two of the last three postseasons and took out all their pent up anger in the 2011 season-opener. This was the game where the Steelers defense was dubbed “old and slow” as the Ravens ran the cut-blocking outside zone scheme all over the Steelers. Losing to Baltimore is bad. Getting throttled by them is even worse.

If any game deserved to get a coach fired, it was probably this one. And that coach should have been Bruce Arians, not Mike Tomlin. In a game against the worst run defense in the league with 40-mile per hour wind gusts and a wind chill of -20, the Steelers came out with one of their worst gameplans in history. Arians called 43 passes and just 19 runs. Ben was sacked 8 times as the Browns blitzed constantly, daring him to beat man-to-man press coverage in the blistering winds. The Browns got out to a 13-0 lead after playing the field position game and getting a few big plays from Josh Cribbs. Jeff Reed kicked field goals at the end of the second and third quarter but the Steelers were never able to threaten the end zone. This was the fifth straight loss that dropped the defending Super Bowl Champs from a midseason high of 6-2 to a low point of 6-7. To make matters worse this came right after the loss to the Raiders mentioned above. Nothing stings like losing to the Raiders and Browns in back to back weeks. The Browns finished the season just 5-11 while the Steelers finished 9-7 but lost a 3-way tiebreaker with the Ravens and Jets for the two Wild Card spots. 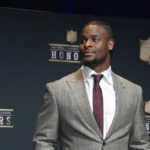 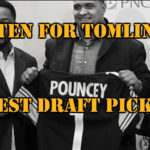 The 1989 51-0 home lose to the browns was the worst loss ever for the black and gold. I know you are talking about Tomlin , but it got me to thinking.

[…] from the past decade. We started by looking at key statistics and recapping the best games and worst games. Today we turn to the player-personnel side of the last decade. While drafts and free agency have […]