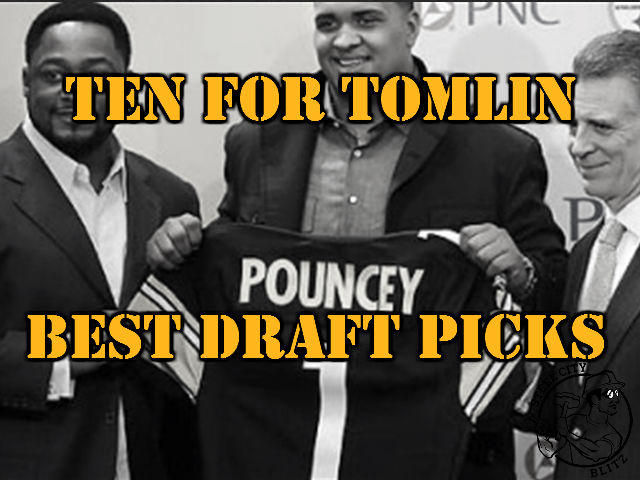 The 2017 Season will be Mike Tomlin’s 11th as the head coach of the Pittsburgh Steelers. With his decade at the helm, he is currently the fifth-longest tenured coach in the NFL. Only Bill Belichick, Marvin Lewis, Mike McCarthy, and Sean Payton have been in their respective positions longer than Tomlin. As we count down the days until the start of Training Camp and the start of the 2017 season, we’re taking a look back at Mike Tomlin’s 10 year tenure as Steelers head coach. The “10 For Tomlin” series will be 10 posts each featuring 10 items from the past decade. We started by looking at key statistics and recapping the best games and worst games. Today we turn to the player-personnel side of the last decade. While drafts and free agency have been a collaborative effort between Mike Tomlin and Kevin Colbert, it is still worth recounting some of the best moves that were made.

Over the last decade, only 10 players picked in the 7th round have gone on to be starters for at least 3 seasons. Kelvin Beachum is one of those ten. Even though he left the Steelers in free agency, the team still hit a home run with his selection. Originally thought of as a “swing” lineman out of SMU capable of playing any position on the line, Beachum quickly showed his adeptness for the mental aspect of the game. He was forced into duty as a center at the outset of his second season when Maurkice Pouncey went down with an injury. From there, he was shifted out to left tackle after the Mike Adams experiment failed. Beachum took over the tackle spot and hung on for two more seasons until departing for Jacksonville in free agency.

The Steelers landed Heyward with the 31st overall pick of the 2011 draft. While he was stuck behind Brett Keisel and Ziggy Hood on the depth chart his rookie year, his play improved as he took on a bigger role in the defense. He led the Steelers in sacks in two of the last three seasons – an impressive feat for an interior defensive lineman. Since becoming a starter in 2013, his 22.5 sacks leads the team.

The Steelers landed two starters in the 2011 draft with Cam Heyward and Marcus Gilbert. Gilbert’s first few seasons were marred by injuries that had him shuttling on and off the field. Once he got healthy, he has been dominant the last few seasons. Right tackles don’t get as much credit as left tackles in the league, but Gilbert has been outstanding – including shutting down Von Miller twice in the 2015 season.

Mike Wallace’s time with the  Steelers ended on a sour note, but that should not take away from how good he was during his time here. Wallace was the 11th receiver selected in the 2009 Draft and he currently leads the class in both receiving yards and receiving touchdowns. Wallace was a big-play threat like the Steelers offense had not seen for a long time. He could stretch the defense and was adept at tracking the ball in the air over his shoulder. Wallace has been one of the Top 10 players from the 2009 Draft, and the Steelers landed him in the third round.

One of the biggest surprises in recent Draft history was David DeCastro falling to the Steelers at 24th overall in 2012. DeCastro has lived up to his billing as the top guard in the 2012 draft class. He has gone to two Pro Bowls and been selected to one All Pro Team. He has been an anchor on the Steelers offensive line that is now one of the best in the league.

The general perception of the draft community entering the 2013 Draft was that running back was a devalued position and the class was not that good. As such, no running backs were taken in the first round. Five running backs were taken in second round. Le’Veon Bell was the second back taken with the 48th overall pick but he currently rates as the top player from the 2013 draft. Bell has run for 4045 yards and 26 TDs while adding 2005 receiving yards and 5 TDs. All told, his 6050 yards and 31 TDs are the most yards from scrimmage and total TDs from the 2013 class. Bell has been a dynamic force on the Steelers offense, known initially for his quick jump-cuts and then developing his slow, patient style of running. When healthy, he is the best running back in the league and his all-around game is something no one else in the league currently possesses.

Woodley’s career after his 2011 injury in a game against New England should not diminish what he did beforehand. Woodley was a second round pick in 2007 stuck behind Clark Haggans on the depth chart but he played so well he quickly overtook Haggans and became the starter in 2008. Woodley posted 3 straight double-digit sack seasons and had 9 sacks before his injury in 2011. Since then, the Steelers have not had another player reach 9 sacks in a season. Woodley had a mix of power and speed, being able to bull rush through tackles but also get around the edge. Woodley’s 58 regular season sacks are 2nd in his draft class and is 5th all-time in Steelers history. Additionally, his 11 sacks during the playoffs are tied for third since 2007.

Timmons was the first selection made during the Mike Tomlin era. He played as a 4-3 outside linebacker at Florida State and was initially slated to play outside linebacker for the Steelers. He missed most of his rookie year with injuries and given his athleticism and LaMarr Woodley’s emergence as a pass rusher, Timmons was transitioned to an inside linebacker role. He was still stuck on the depth chart behind James Farrior and Larry Foote but saw increased playing time during the Steelers Super Bowl run in 2008. Timmons was forced back into an outside linebacker role in 2011 due to injuries. While he arguably deserved to make the Pro Bowl in at least 3 seasons, his only appearance was in 2014. Nevertheless, he provided 10 solid seasons for the Steelers and was an anchor in the middle of the defense, rarely coming off the field and excelling in both blitzing, run defense, and pass defense.

The Steelers selected Pouncey with the 18th overall pick in 2010. He has missed two seasons due to injury, but has reached the Pro Bowl in all five of his healthy seasons. Pouncey has been an All-Pro twice and his abilities in both run blocking and pass blocking have helped stabilize the Steelers offensive line. Pouncey’s athleticism and foot speed have enabled the Steelers to expand the complexity of their blocking schemes and utilize Pouncey’s ability to pull in either direction. To watch him play, he has some of the fastest hands you will ever see on an interior lineman, which enables him to win consistently against defenders.

The Steelers landed two of the Top 10 players in 2010 at opposite ends of the Draft. In the 6th round they took Antonio Brown who developed from a relatively unheralded prospect into the best receiver in the league. Brown battled with Emmanuel Sanders for playing time in his rookie year but delivered a kickoff return for a touchdown in Week 2 against Tennessee and caught a pass against his helmet in the playoffs against Baltimore that helped deliver the victory. From there his career took off. In 2011 he had over 2000 all purpose yards with 1108 receiving yards and over 1000 yards in punt and kick returns. In 2013 he broke the Steelers single-season receiving yards record (then proceeded to break his own records in 2014 and 2015). In 2014 he broke Hines Ward’s record for single-season receptions, then broke his own record again in 2015. Brown is a 5-time Pro Bowler and 3-time All Pro and is well on the way to breaking all of Hines Ward’s team receiving records. 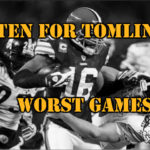