Taylor, Steelers Combine to do the Right Thing 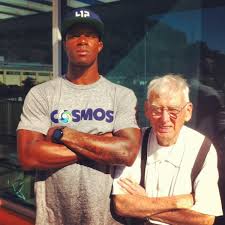 I’ve yelled at Ike Taylor through my television screen as much if not more than any other Steeler over the last decade.

A dropped interception here and a blown coverage there (not always his fault by the way) had me at times wondering if things could possibly get any worse.

Yet today, I couldn’t be more pleased to say that I’m glad Ike Taylor will be in Pittsburgh at least one more year.

Taylor and the Steelers agreed to a one-year $2.75 million deal last evening that saves the organization $4.25 million.

With the release of LaMarr Woodley yesterday and other contract re-structures, the Steelers should be under the cap by roughly $7 million.

In the end, Taylor knew he really didn’t have any leverage. Either take the pay cut or be released. Most likely learning from James Harrison’s situation last year, Taylor took the pay cut and chose to remain a Steeler.

For all of his dropped interceptions, Taylor has been a constant at the cornerback position for the Steelers. He has certainly had his share of ups and downs but every cornerback in this league does.

I anticipate Taylor remaining the starter at one corner while Cortez Allen will hold down the other with William Gay being a possible alternative.

Remaining a Pittsburgh Steeler was important to Taylor and I believe it was important to the organization as well. His relation with Dan Rooney is well-documented and his work ethic is unrivaled. He has stayed true to himself and has never tried to be anything that he wasn’t.

I will continue to scream at Ike Taylor every Sunday but I’ll be a little happier to do so.

Steelers Target Free Agent Corners; Taylor on the Way Out?

Steelers’ Focus Should be on Cortez Allen...

One of the best pieces I’ve read. I have to admit to the same thing when it comes to Ike which I think goes for most if not all of Steeler Nation. But what Ike and the organization did spoke volume and set a tone. This I think is why Steeler Nation is represented like it is. Class, Loyalty, and Much Respect
BlknGld 4 life!