Steelers Would Be Wise to Leave Harrison, Holmes on the Market 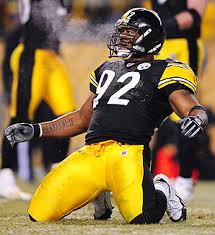 Sentimentality is often the death of the average sports’ fan. Much time, energy and money are invested into a favorite team and when our favorite players leave and then suddenly become available, fans go gaga at the prospect of them coming back.

Current Steelers’ cornerback Ike Taylor flat-out said on his Trib-Live Radio show this week that both Holmes and Harrison want to come back. We can’t dismiss Taylor because he was quite prescient at tagging a couple of Steelers’ draft picks but this is a different game altogether.

My take on the issue of them returning is this; “No.”

You could make arguments that I would listen to about Harrison coming back at an extremely small number because the outside linebacking situation is both young and thin.

I’ve always appreciated Harrison and the way he played the game. He brought some great moments to all of us but I believe it is time to move on for both him and the team.

The addition of James Harrison is unlikely to make this team significantly better overall so I say get on with the youth movement. Rookie Jordan Zumwalt will see some time at outside backer and free agent addition Arthur Moats could see time there as well.

In the case of Holmes, I hardly think it’s even worth writing about but I will. If you recall, Holmes was sent to New York for a fifth round draft pick as he had become rather unwelcome in the Steelers’ locker room.

Fans obviously have a love affair with Holmes because of his tremendous catch to win Super Bowl XLIII but that’s no reason to bring him back so many years afterwards. He has been plagued with injuries throughout his time in the Big Apple and what would he really provide the Steelers that they don’t have?

This group of receivers is led by Antonio Brown and it’s time to let him lead. Bringing in Holmes would disrupt the chain that Brown and receivers’ coach Richard Mann have worked hard to obtain.

While it’s a nice thought to see former players come “home” it doesn’t always make sense from a monetary or logistical point of view. Such is the exact case here with James Harrison and Santonio Holmes.

How Confident Are You With Steelers’ Tight...

Ryan Clark is a Perfect Example of...

Steelers Match Offer For Sanders; Was it...

Thank you for every other informative site. Where else may just I am getting that type of info
written in such an ideal approach? I have a project that I am
simply now operating on, and I’ve been at the look out for such info.