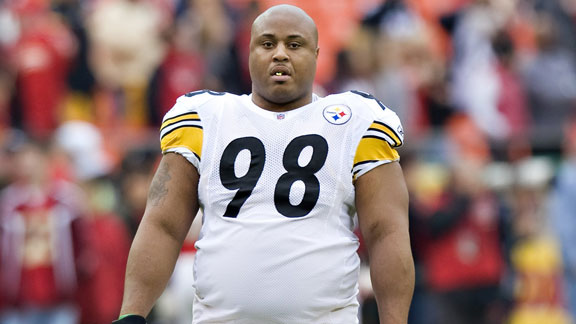 As the Steelers look towards the draft at the end of this week, I imagine they’re not real thrilled at the fact that they will not have their original 5th and 6th round selections; having traded them away for Brandon Boykin and Josh Scobee last off-season.

Kevin Colbert has been the Steelers’ main draft decision maker now since 2000, and while he doesn’t move around in the 1st round a ton, he’s shown he’s not afraid to make a move, and  he’s made great decisions when he does make a move.

There’s been plenty of other deals made in Colbert’s era, but these are the only moves made in the first round.

In a year where there may not be an obvious value pick at 25, and one where they’d probably like to add a pick or two, I see a logical move that the Steelers should explore on draft night if they get lucky enough that a coveted Quarterback falls into their lap.

Late last week, Charlie Campbell of Walterfootball.com reported that Cleveland and Denver were looking to make a move up from 31 and 32 respectively, to jump Kansas City at the 28th pick if a Quarterback is falling down the board. That Quarterback would likely be Paxton Lynch, but maybe Connor Cook is in play if Lynch goes in the top 10 and those teams at the end start to get antsy that they’ll miss out.

That QB anxiety is where the Steelers could cash in if they don’t love anyone that’s there at 25. There’s rumors that Mike Tomlin is smitten over Keanu Neal, who I think could definitely still be on the board at 31/32.

I start out by saying, a deal with the Denver Broncos makes way more sense for Pittsburgh.

First of all, while it’s not unheard of, typically teams within the same division don’t make deals with each other. Imagine if the Browns finally found their franchise QB, and the Steelers were the ones that handed him to them on a silver platter? However, the teams did make a draft day trade 2013 when the Steelers traded a future pick to grab Shamarko Thomas.

The second (and bigger) reason Denver makes more sense, is that pick 31 is still in the first round, while pick 32 is not. That’s important, because it means whoever the team selects will be eligible for a 5th year, team option. While that option isn’t extremely beneficial for the team now with Jarvis Jones, if you hit a homerun on your 1st round (and the Steelers often do), it’s a huge advantage in keeping a star player on the roster.

If you look at the draft value trade chart, it’s honestly pretty cut and dry. My proposal is below, with the trade chart values in parenthesis.

The values come out almost dead even. Denver wouldn’t sweat this deal at all, because they have a 3rd round compensatory pick just a few picks after the 3rd that they’re giving away, and they’re a team with a championship window with even just a game manager at the QB position; so they need to be aggressive.

The Steelers would probably love this deal, but maybe even squeeze Denver a little bit to try and get them to throw in a late round pick as well.

Maybe all this is a moot point, because someone the Steelers are in love with falls to 25, but this could be a great fallback option. They could in all likelihood they get they same player they would’ve selected at 25 at 31, and pick up a 3rd in the process.

The last time they moved down they found the centerpiece of their championship defenses, maybe it’s time for a repeat in 2016.

A Draft Day Trade Scenario That Makes a Lot of Sense for the Steelers was last modified: April 25th, 2016 by steelbydesign
#steelersBroncosCasey HamptonKeanu NealTroy Polamalu