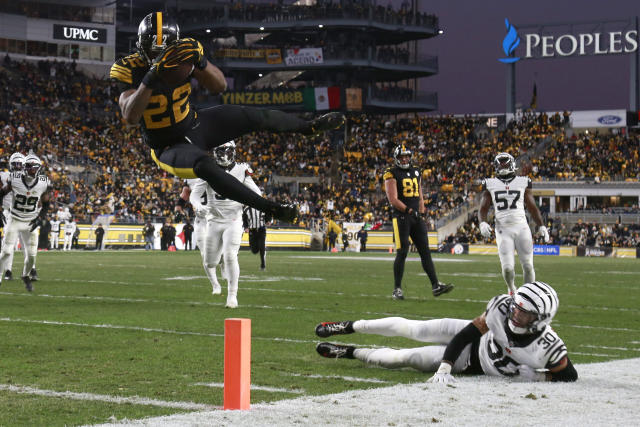 The Pittsburgh Steelers dropped to 3-7 on the 2022 season losing 37-30 at home to Cincinnati. Here were my rapid-fire thoughts as the game unfolded.

-For the love of God can we please stop with the shovel passes to Zach Gentry?

-Spectacular run and leap to the end zone for a TD by Najee Harris(20 rushes 90 yards 2TD). What an athlete.

-Rough day for Kenny Pickett(25/42 265 yards 1TD) especially in the second half. He needs to lead his receivers better and MUST get rid of the ball sooner especially on RPOs. I wonder at times if Mike Tomlin and Matt Canada aren’t preaching “ball security” to him so much that he’s afraid of really letting it rip. The lack of running game in the second half didn’t help him.

-The flea-flicker on first down after a terrific play by George Pickens(4 Rec 83 yards TD) made zero sense. OL struggled the entire second half. Defense wasn’t buying that for a second.

-Mason Cole out injured in the second half coincided with the poor offensive line performance after halftime. Have to think that was a big issue as to why the running game faltered.

-I think we saw just how good George Pickens can be. But… he did let a sure TD go through his hands near the end of the game and then acted like a complete idiot when he was tossed out for a late hit on the onside kick. Learning experience I would hope.

-The injury to Jaylen Warren did not help the cause on offense. He’s important not just in spelling Najee Harris but also in blitz pickup and in receiving as well.

-Dan Moore has been incredibly durable in his one plus seasons but I really think the Steelers need an upgrade here. He gets pushed around way too easily and way too often. His presence in the running game isn’t consistent either.

-Diontae Johnson has to be frustrated. Just four receptions for 21 yards.

-Minkah Fitzpatrick being back was both incredible and relieving. He makes me breathe easier.

-I respect the hell out of Robert Spillane. Tremendously hard worker and overachiever who has made himself a starting NFL LB. That said, the Steelers have to upgrade the position. His lack of speed and strength is exposed too often.

-What a play by T.J. Watt to intercept that ball at the line of scrimmage. He added that to a half sack but was largely a non-issue most of the evening.

-Myles Jack returned to lead the team with nine tackles but he had some coverage issues.

-Cam Heyward played his ass off. Nothing new but the guy just keeps coming and knows how to make plays.

-The second half defensive performance was in large part due to the inept offensive play. Never had a chance to catch their breath. That said, too many guys running free and catching passes. When the pass rush isn’t getting home the coverage isn’t good enough. They had no answer for Tee Higgins who had nine receptions for 148 yards.

-Arthur Maulet just doesn’t cover well enough from the slot. Too many times receivers are able to make catches on him.

-Quiet all around days from Larry Ogunjobi, Terrell Edmunds and Cam Sutton.

-Steven Sims had a nightmare start fumbling the first punt into the end zone but he had some solid returns on the evening.

-Matt Canada was completely out-coached in the second half. We can say some of that was losing Mason Cole and Jaylen Warren but the Bengals adjusted at halftime and Canada didn’t. Another reason he’s in over his head.

-Teryl Austin is in over his head. I get that the offense doesn’t do him many favors but he’s constantly out-coached. It’s the same thing that happened to him when he was in Detroit and Cincinnati.