The Steelers are permitted to host 30 prospects for pre-draft visits. With less than a month until the draft, visits have begun and are in full swing. Pre-Draft Visits are a good indicator of the Steelers draft priorities as they have selected 33 players in the last 8 years that came on a pre-draft visit (and signed a handful more as undrafted free agents). While the Steelers have a history of using about half of their picks each year on prospects who have visited, the Steelers have also used these visits to bring in players that might have some question marks on their resume including medical evaluations and off-field questions. The Steelers will also use pre-draft visits to do some extra scouting on players that will likely be undrafted free agents that they may have on their radar.

For each prospect, I added Rankings from some of the more reliable draft analysts around – Lance Zerlein of NFL.com, Rob Rang of CBS Sports,  Dane Brugler of NFL Draft Scout, and Matt Miller of Bleacher Report. Additionally, I listed three athleticism metrics: SPARQ, RAS, and Mock Draftable “webs.”  SPARQ rankings are from 3 Sigma Athlete and measure of explosiveness and athleticism with a score of 100 for an “average” NFL athlete. Over the past few seasons, the Steelers have targeted players in the draft with high SPARQ rankings. RAS (or “Relative Athletic Score“) was developed by Kent Lee Platte of The Pride of Detroit. While SPARQ uses 100 as the average score, RAS is on a relatively simple 0-10 scale with 5 as the “average” player at the position. Mock Draftable is a great site that compiles testing data from draft prospects and keeps historical records to provide comparables for each player.

Analysis: Vander Esch actually visited Pittsburgh on Saturday but it was not reported as a visit until today. For starters, make sure to check out Steel City Blitz draftnik cnic’s scouting report on Vander Esch, linked above. Vander Esch is absolutely a first round talent in this draft and is one of the “big four” inside linebackers (along with Roquan Smith, Tremaine Edmunds, and Rashaan Evans) that will all likely go in the first round. The Steelers have not often gone outside the power conferences with their first round pick, but Vander Esch has the talent, productivity, and athleticism to fit what the Steelers are looking for at inside linebacker. Ryan Shazier was a one-of-a-kind athlete, posting a SPARQ score of 152.2 and an RAS of 9.88, but Vander Esch is not far off athletically with a SPARQ of 143.6 and an RAS of 9.97. He is a bigger player than Shazier (weighing over 250 pounds) but can also fly all over the field making plays. He was incredibly productive at Boise State with 141 tackles, 8.5 TFLs, 4 sacks and 4 pass deflections, and 4 forced fumbles in his redshirt junior season. He is one of the better coverage linebackers in the draft and would absolutely be able to stay on the field for all three downs – something the Steelers sorely lacked after Ryan Shazier was lost last season. He has good range across the middle of the field and was the Mountain West Defensive Player of the Year. He has some room for improvement with his hands to get separation from blockers and free himself up, but all in all he is essentially a first round lock and has visits lined up with every team in the later half of the first round.

Analysis: Bonnafon played 3 positions during his career at Louisville, starting as a dual-threat quarterback then moving to wide receiver and running back during his junior and senior seasons. His most productive year was as a senior when he primarily played running back and had 459 yards (4.9 yards per carry) and 7 TDs and added 21 catches for 182 yards and another score. He is noted for being an outstanding athlete but was not invited to the NFL combine and likely isn’t on many radars. His willingness to change positions at Louisville shows he is able to put the team first and garnered praise from his coaches. He showed flashes of his athleticism in college and the Steelers have taken raw athletes that played as dual-threat quarterbacks in the past and attempted to mold them into skill position players. Bonnafon is likely a late Day 3 pick or undrafted free agent who could be a project player, but with a year on the practice squad could develop as either a running back or wide receiver.

Analysis: The Steelers signed Roosevelt Nix to a 4-year contract this summer and have zero need at the fullback position. The only way it makes sense for the Steelers to bring in Moore (or any other fullback) would be to fill a second-team roster spot during training camp and potentially be on the practice squad during the regular season as an emergency backup in case Nix gets hurt.  All that said, by all accounts, Moore is a stand-up individual and was on the SEC Academic Honor Roll all 4 seasons and a First Team Academic All-American as a senior and was recognized for his community service. He switched from FB to TE as a senior as Matt Canada’s LSU offense moved away from the FB role and was recognized for his blocking abilities. He will likely be an undrafted free agent but seems to be the kind of high-character individuals that the Steelers like to have in their locker room and would be willing to give a shot to as an undrafted free agent and potential practice squad member.

Analysis: Stop me if you’ve heard this before, but the Steelers are interested in a 5’10” 180-pound receiver. James’ 2017 season was cut short after a broken collarbone injury, so this visit could have also been for an additional medical re-check. He was an incredibly productive receiver at Middle Tennessee State, in just 2 1/2 seasons setting school records for receptions, receiving yards, and touchdowns. In his redshirt freshman year he had 108 catches for 1346 yards and 8 TDs then followed that up with 1625 yards and 12 TDs as a sophomore. He is a dynamic playmaker with the ball in his hands and played both as a receiver and wildcat quarterback as a sophomore. One of the best parts of his game is his foot quickness and he is elusive both before the catch and with the ball in his hands. James has some capabilities as a punt returner as well and could be a viable Day 3 pick that could fill in the role Eli Rogers played last season as a slot receiver and punt returner. 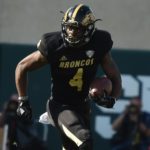 […] Make sure you’re keeping track of all of the prospect visits right here at SCB. Ian is getting the latest visits out each day! Here is the latest which includes a guy many believe the Steelers are targeting in the first. […]