The Steelers are permitted to host 30 prospects for pre-draft visits. With less than a month until the draft, visits have begun and are in full swing. Pre-Draft Visits are a good indicator of the Steelers draft priorities as they have selected 33 players in the last 8 years that came on a pre-draft visit (and signed a handful more as undrafted free agents). While the Steelers have a history of using about half of their picks each year on prospects who have visited, the Steelers have also used these visits to bring in players that might have some question marks on their resume to gather more information in creating their draft board. These question marks range from double-checking medical evaluations or to have the opportunity to sit down one-on-one with players that have had off-the-field issues. The Steelers will also use pre-draft visits to do some extra scouting on players that will likely be undrafted free agents that they may have on their radar.

For each prospect, I added Rankings from some of the more reliable draft analysts around – Lance Zerlein of NFL.com, Rob Rang of CBS Sports,  Dane Brugler of NFL Draft Scout, and Matt Miller of Bleacher Report. Additionally, I listed three athleticism metrics: SPARQ, RAS, and Mock Draftable “webs.”  SPARQ rankings are from 3 Sigma Athlete and measure of explosiveness and athleticism. SPARQ rankings use a score of 100 for an “average” NFL athlete and provides the percentile where a prospect fits athletically. Over the past few seasons, the Steelers have targeted players in the draft with high SPARQ rankings. RAS (or “Relative Athletic Score“) was developed by Kent Lee Platte of The Pride of Detroit. While SPARQ uses 100 as the average score, RAS is on a relatively simple 0-10 scale with 5 as the “average” player at the position. Mock Draftable is a great site that compiles testing data from draft prospects and keeps historical records to provide comparables for each player.

Analysis: Dawson played both slot corner and boundary corner in his time at Florida. He likely projects as a slot corner in the NFL. He has good ball skills and led the Gators in interceptions (4) and passes defended (9) in his senior season. Dawson is a strong and compact player who is a good tackler in space – something the Steelers defense has certainly lacked. There are some concerns about his long speed and his ability to turn and run with outside receivers. He is at his best with the ball in front of him when he can play downhill and attack. Dawson is a physically strong corner who is not afraid of contact (both before and after the catch). He projects as a mid-round cornerback prospect, which is likely around the time the Steelers may go looking for depth at the position.

Analysis: Iyiegbuniwe opted to go to the NFL after his redshirt junior season rather than to return for his final year at Western Kentucky. He put up a lot of big numbers last season (116 tackles, 11.5 tackles for loss) but there are some questions about his skill set. He is likely a late-round pick that will be relegated to special teams duties the first few seasons in the league. He has the athletic upside to run in coverage but doesn’t have the size or physicality to take on offensive linemen and blow up running plays. Iyiegbuniwe is a rangy linebacker somewhat in the mold of a “Dollar Linebacker” or in-the-box safety. One scouting report called him “a linebacker in a safety’s body.”

Analysis: Roback was a 3-year starter for Eastern Michigan who threw for at least 2300 yards and 14 TDs each season. He was a pure shotgun quarterback who led the Eagles to their first Bowl game in 29 years when they went 7-5 and played in the Bahamas Bowl in 2016. Roback is not a scrambler and has a statuesque 2.33 Relative Athletic Score profile. Athletically, that puts him in the range of Kyle Orton, Mike Glennon, and Derek Anderson. Roback projects as either a late round pick or an undrafted free agent. There are also some off-field concerns as he was suspended in 2016 for a violation of team rules. As I said at the outset, the Steelers will use these pre-draft visits to get additional scouting information on guys who did not go to the NFL combine and could be potential UDFA signings. The Steelers traditionally have a 4th QB on the roster for training camp to serve as a “camp arm” and Roback could fill that role this year. 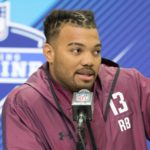 […] scouting on players that will likely be undrafted free agents that they may have on their radar. Earlier this week, the Steelers hosted Florida CB Duke Dawson, Western Kentucky LB Joel I__, and Eastern Michigan QB […]