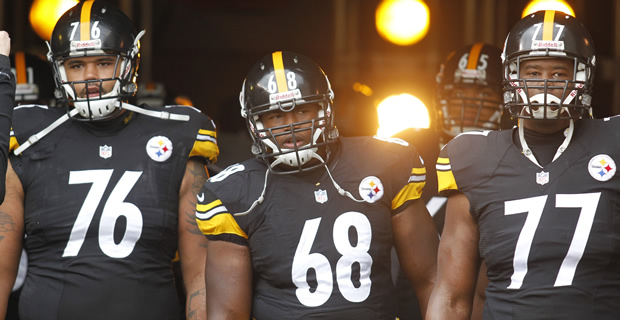 The Pittsburgh Steelers offensive line was regularly referred to as the teams biggest weakness over the past decade, even when they were winning Super Bowls.

The re-building of the line began in 2010 with the selection of Maurkice Pouncey in the first round. Since Pouncey, the Steelers also spent a 1st on David DeCastro, and two 2nd’s on Marcus Gilbert and Mike Adams.

For a team with a right handed Quarterback, the left tackle position is often one of the most important positions on the entire roster. That spot on the Steelers roster is manned by a 6’3″ 300 pound, 7th round pick, out of SMU.

Kelvin Beachum was selected with the Steelers’ third 7th round pick in 2012, and was only taken 5 picks ahead of that year’s Mr. Irrelevant. Beachum was selected as an under-sized tackle to come in and use his versatility to back up multiple positions along the line… If he even made the team.

Beachum made the team and did just that early in his career, playing at every spot on the offensive line and even some tight end. The highly versatile lineman would often play here or there due to injuries… until last season.

Everyone knows that the Steelers disappointed in 2013, but the Steelers won 6 of their 8 final games, in large part because the offensive line started to gel. I don’t think it’s a coincidence that’s also when Kelvin got his shot, and held down the starting left tackle spot.

Still, many wondered  this off-season, could a 7th round pick that’s smaller than center Maurkice Pouncey be the long term answer at the position?

That was answered pretty loud and clear during the 2014 draft, with the Steelers not spending a single selection on an offensive lineman.

Kelvin is a hard worker. He has to be, because he’s the smallest at his position in the league in both height and weight. He works tirelessly on his technique, and even has reached out to former Steelers pro bowler Tunch Ilkin to help with his hand technique.

According to the NFL grading site, Pro Football Focus, Kelvin just had the best game of his career in Cincinnati, earning a 4.1 grade in the game (highest of any Steeler that day). The team didn’t allow a sack to the Bengals, and they ran Le’Veon Bell around the left side all game long.

For the season Beachum has a 14.2 pass blocking grade, and a 1.7 run blocking grade. He’s allowed 7 sacks, 3 hits, and 8 hurries on Ben Roethlisberger.

While the sack numbers are a tad high, when you look across the board his hurry numbers are very low, and he’s also at somewhat of a disadvantage given Ben’s unwillingness to throw the ball away and take sacks.

Overall, PFF ranks him as the 7th best left tackle in the league. With the new pro bowl format there should be 8 tackles in the pro bowl regardless of conference.

The pro bowl is often a popularity contest, particularly at a position that’s not easy to grade by the common fan… and Kelvin Beachum is possibly the most underrated player in the entire league.

That doesn’t bode well his chances of being selected, but I know that I’ll be voting for one of my personal favorite players on the team.

Whether Beachum is recognized or not, his play this season has been at a pro bowl level. 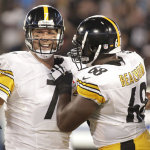 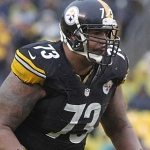 […] go too in depth here, because we’ve had entire write up’s dedicated to Beachum like this one. What Beachum has done despite his small stature, and late draft position is really […]

Undoubtedly Beachum helped improve the line’s pass protection. But if I need two yards on the goal line, I don’t see Beachum ponding the tackle in front of him. He has way more than any of us expected. However I guess am just to biased against his size and noticeable lack of strength to pay him big money.