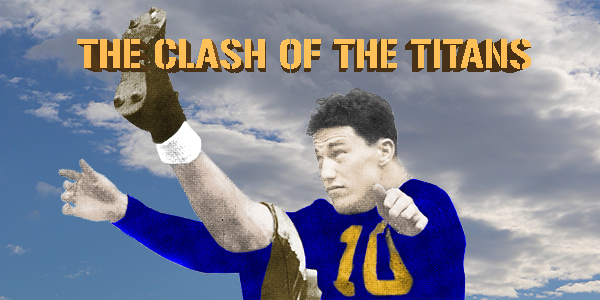 As the nation was leaving the depression years behind, the NFL was increasing in popularity and Art Rooney was keen to draw in some of the million plus fans who were now paying to watch pro football.

Rooney finally brought in the player who he thought was going to turn his losing franchise around. He was determined to ensure his Pirates had a successful season and believed that Byron “Whizzer” White was the just the player to make it happen.

The $15,000 salary for White was a big investment for an owner who was losing money, but the player’s addition to the Pirates certainly sparked a great deal of interest from around the league.

The Washington Redskins’ owner, George Marshall, recognized the significance the attraction that White brought to the game. Marshall also had a player with a salary rumored to be the same as White’s, quarterback Sammy Baugh.

Baugh had proved his value by leading the Redskins to the championship in his rookie season. In the 1937 championship game he completed 18 of 33 passes for 335 yards and three touchdowns to beat the Chicago Bears 28-21.

When Rooney signed White, Marshall was quick to wire the Pirates owner, “Congratulations. Now how about hiring Pitt Stadium for the battle between the Whizzer and the Slinger (Sam Baugh). That should fill the state of Pennsylvania.”

The Redskins were scheduled to play the Pirates on October 2 and Marshall saw the drawing power the two players would bring to a contest between two elite athletes.

After the 1938 season opened, White scored a touchdown in the Pirates first three games. Although he confirmed his value, the team slumped to 0-3 as they failed to scrape a win from any of the games.

When the Pirates won their next two, it appeared they had turned the corner. It proved to be a false dawn as they reverted to their losing ways with two defeats before they faced Washington. The game had been postponed to November 6 due to challenges with Forbes Field potentially being required for baseball.

Washington arrived in Pittsburgh 4-1-2 and atop the Eastern division, just ahead of the New York Giants. The Pirates were 2-5 and floundering, but it was their final home game of the season and expected to bring in a big crowd with the added attraction of the two star players. 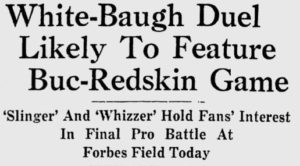 The game was sponsored by the Veterans of Foreign Wars and the Pittsburgh Press were high on the interest in the city. “The anticipated clash of two of football’s greatest performers, a battle of All-Americans local fans have dreamed of since the season opened, becomes real this afternoon in Forbes Field.

“The Slinger” should have a shade in the passing. “The Whizzer” is expected to show greater advantage in lugging the ball. However, in team strength, every apparent edge belongs to the Redskins.”

The scene was set for professional football to make a big splash in Pittsburgh. 60,000 fans turned out the previous day to watch Carnegie Tech upset the nation’s number one Pittsburgh Panthers 20-10. Art Rooney finally had a stage on which he hoped his team would show Pittsburgh how entertaining pro football could be.

Baugh went into the game ranked second in passing to New York’s Ed Danowski.  White had led the league in rushing after five games but had slipped down the rankings as the Pirates sputtered.

Nearly 13,000 fans turned out to watch a game that went three quarters without a score in a solid defensive display from both teams. The Pirates managed to bat down most of Baugh’s pass attempts while Washington’s run defense smothered White’s ground attack.

When the deadlock was finally broken, it was Baugh who brought the travelling fans to their feet. Baugh fumbled a snap but managed to scoop it up before finding George Karamatic with a desperation pass. Karamatic stretched to haul it in before dancing down the sideline for the only score of the game.

Although Washington triumphed 7-0, the Pittsburgh Post-Gazette credited White with “showing great form on defense, punting beautifully, and providing the big feature of the lone local offensive with his long heave to Davidson. He failed to gain much yardage as his figures of 12 carries for 25 yards reflected the general impotence of the home attack.”

The Pittsburgh Press concluded, “the Pirates most disastrous home season in six years of professional football was written into the records today, enabling owner Art Rooney to throw away a fountain pen that has written in nothing but red ink since early September.”

The Pirates finished the season 2-9. The signing of White was not the success at the ticket office that Art Rooney had expected, and he later sold the player’s right to Detroit. White finished the season as the league’s leading rusher before spending 1940 and 1941 with the Lions. He led the league again in rushing in his first year with the Lions.

The Redskins finished 6-3-2 and were second to the Giants in the Eastern division.  Baugh spent sixteen years with the Redskins, leading them to another championship in 1942.

SCB Steelers Quick Hitters: The “What Did I Miss?” Edition