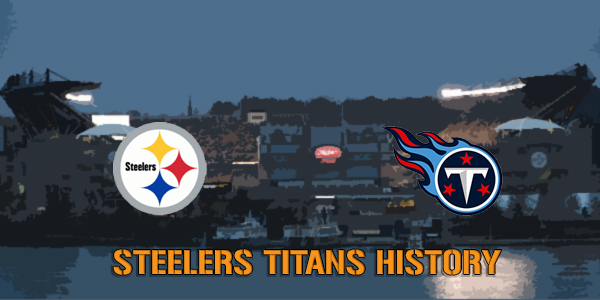 The Tennessee Titans began life in 1960 as the Houston Oilers when the American Football League was created to compete with the NFL. The Oilers won the AFL’s first two championships.

In 1970 the two leagues merged, and Dan Rooney was instrumental ensuring the Oilers joined the Pittsburgh Steelers in the AFC Central division. The Oilers subsequently moved to Tennessee in 1997 when they became the Tennessee Oilers for two years before morphing into the Titans.

During those early days as the Oilers, the two teams became bitter rivals usually with the Steelers coming out on top. While the Steelers are ahead 47-31 in their contests, the Titans hold a 12-10 edge since moving to Tennessee.

In 1997, Tennessee began a streak of seven wins against Pittsburgh. Despite reaching the AFC championship game that year, the Steelers struggled for the next three seasons having placed their trust in Kordell Stewart and Mike Tomczak.

Stewart earned the starting job for the 2001 season after leading the team to a 9-7 record the prior year. Despite losing the season opener in Jacksonville, Stewart confirmed he was the man by guiding the team to four consecutive victories before facing the Titans.

Tennessee had made the playoffs the previous year but opened the 2001 season by losing their first three games. They recovered from that bad start when travelling to Pittsburgh on the back of two wins.

The game would be the final AFC Central game between the teams played in Pittsburgh. The Titans were moving to the AFC South and the Steelers to the AFC North the following season.

The thirty-year intense competition between the teams had become a NFL tradition.

Titans General Manager Floyd Reese acknowledged, “The rivalry and ‘Pittsburgh Week’ as we call it, has always been something that you knew was not going to be comfortable but always looked forward to, going way back to when I was coaching, and Chuck Noll was coaching. It was always a bloodletting on both teams’ parts.”

Tunch Ilkin was more forthright. “Every time we played those guys it was like a bloodbath. There were cheap shots, elbows – we’re cutting them because we know they hated it.”

Bill Cowher’s Steelers held a 9-0 home record when playing on Monday Night Football, but all the previous games were played in Three Rivers Stadium. This would be the first game played on a Monday in Heinz Field. 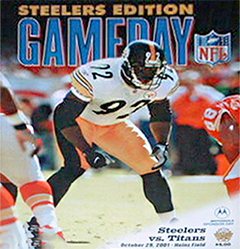 Pittsburgh received the opening kickoff and Kordell Stewart led them 77 yards on eleven plays before Jerome Bettis finished the drive with a 1-yard touchdown run.

Tennessee’s next drive took the game into the second quarter when Steve McNair found Frank Wycheck with a 4-yard touchdown pass.

On the Titans’ following possession, Steelers safety Brent Alexander’s one-handed interception brought their series to an abrupt end and set Pittsburgh up on their opponents’ 36. With a first down on the Titans’ 3, Stewart rolled right in an attempt to get a pass off. With linebacker Randall Godfrey pulling him to the ground, Stewart found Hines Ward with a 3-yard pass for the touchdown that put the Steelers back in front.

With time in the first half expiring, and with a fourth and five on the Tennessee 29, the Steelers lined up seeming to attempt a 42-yard field goal. Kicker Kris Brown took a pitch from holder Josh Miller and sprinted left end to pick up a first down.

Coach Cowher tried another piece of trickery with a direct snap to Ward. Ward’s pass attempt fell incomplete and the Steelers then settled for a field goal to take a 17-7 lead into the locker room.

While the Steelers were keeping Eddie George quiet, Jerome Bettis was complementing Stewart’s passing and it was the Steelers who increased their advantage in the third quarter. A punt return of 31 yards by Hank Poteat gave Pittsburgh a further short field. A Plaxico Burress completion of 43 yards set up the 7-yard touchdown run by Bettis.

The Steelers increased their lead with a field goal from 27 yards. The ensuing kickoff saw Mike Logan recover his forced fumble which produced another short field of 29 yards for the Steelers.

An athletic completion from Burress when he outreached the defender to deftly tip the ball to himself for a gain of 28 yards make short work of the possession. Stewart rolled in for the 2-yard touchdown at the beginning of the final period.

Defenses dominated the final exchanges including back-to-back sacks by the Steelers on McNair. The Steelers were comfortably in control and put Tommy Maddox on in relief of Stewart and the fans enjoyed his 57-yard pass to Troy Edwards.

The Pittsburgh Steelers 34 vs the Tennessee Titans 7

The crowd of 63,763 set a new record for a Steelers game in Pittsburgh. Coach Cowher was fervent with his praise for the fans. “It was electric,” he said. “The fans were great. We have special fans here. They appreciate solid football. We’ve been a little down around here for a couple of years, but that’s changing.”

Plaxico Burress became the first Steeler to gain 100 yards receiving since the 1999 season. “This is one of those things you dream of when you’re a little kid and watching Monday Night Football,” he said.

“It was a big game, I was happy for him,” acknowledged Coach Cowher. “He’s worked very hard.”

Kordell Stewart enjoyed his best season with the Steelers leading them to the playoffs with a 13-3 record. They fell 24-17 to Drew Bledsoe and the Patriots in the AFC Championship game.