Steelers History: No Longer the Mistake on the Lake 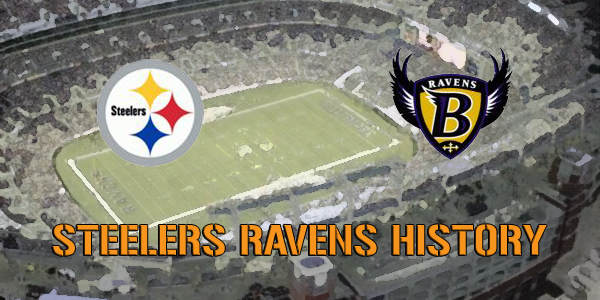 As Steeler fans are aware, the Baltimore Ravens are really the Cleveland Browns in new colors. I guess as we currently own the Browns, we could look upon the Ravens as a fox in sheep’s clothing.

Initially, the morph into the Ravens didn’t change the Steelers’ dominance over their rivals and 1997 saw Pittsburgh begin a streak of five wins against the Ravens; a feat they repeated in 2001.

To entice the Ravens to move to Baltimore, the promise of a new $220 million stadium was part of the bribe. The mistake on the lake Municipal Stadium in Cleveland was showing its age and Modell wanted a bright new shiny stadium to display his team.

The first game played in Baltimore’s Camden Yards stadium was the 1998 season opener on September 6. Naturally the NFL ensured it would be a real show piece with the main attraction based on the invitation of the Steelers to the party.

The Ravens had a good training camp, and Steelers Coach Cowher was aware of the significance of the game. “They’re coming off a 4-0 preseason, it’s the first regular season game in a new stadium and we’re the Pittsburgh Steelers. There is going to be a lot of excitement. We’re aware of the kind of arena we’re going to step into.”

Ex-Steelers future Hall of Famer Rod Woodson had signed with the Ravens and Baltimore defensive tackle Tony Siragusa believed, after a year together and with the addition of Woodson, the Ravens defense  was an improved group.

Baltimore tackle Spencer Folau was emphatic, “I’ve never been around more guys who have been psyched for one game. This was our goal throughout camp… this game.”

The Ravens had also changed their quarterback, replacing Vinny Testaverde with Jim Harbaugh. The Ravens had improved over their first two seasons and their Coach Ted Marchibroda suggested, “This is the best team we’ve had since I got here.”

Steelers’ Jerome Bettis joined in the pregame banter, “It would be great to have them start their new stadium off with a loss to the Steelers. That’s definitely motivation for us.”

The fans’ celebrations of playing in their new stadium survived the first half when the teams exchanged field goals but began to turn to gloom in the third quarter. The locals had to suffer Baltimore’s Matt Stover missing three field goals only to watch Norm Johnson edge Pittsburgh in front with a 49-yard field goal.

On the Ravens next series, the fans witnessed a comedy of errors after Pittsburgh forced them to punt.  Baltimore’s snapper Harper Le Bel, who had struggled on previous field goal attempts, bounced the ball through the legs of punter Kyle Richardson. 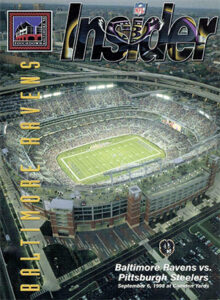 With the Steelers downfield ready to return the punt, the punter had time and opportunity to retrieve the situation but inadvertently kicked the ball as he bent down to pick it up. Wasting a chance to kick it out of bounds, he finally fell on the ball presenting the Steelers with a first and goal on the Baltimore five. Kordell Stewart’s took advantage of the field position with one-yard dive on third down to put the Steelers 13-3 ahead.

Stewart led the Steelers on a 73-yard drive at the beginning of the final period finishing with a touchdown pass of 20 yards to Charles Johnson to increase Pittsburgh’s lead to 20-3.

The Ravens fought back with a field goal and a 64-yard touchdown catch from Jermaine Lewis to put them a touchdown behind. With 37 seconds left in regular time, the Steelers were backed up on their 28 when Josh Miller produced a punt of 68 yards that was downed on the Ravens’ 4. The perfect punt saw Coach Cowher running onto the field to greet his punter with a big hug knowing it gave the Steelers a 20-13 victory.

With Bettis held to 41 yards and Stewart throwing two interceptions, Cowher admitted, “We certainly didn’t play up to our standard on offense. We played good defensively. The bottom line in this business is finding a way to win and we did that today.”

It was a Steelers’ win that christened the Ravens new stadium and saw 69,000 fans leave their celebratory party with their heads down. “Our fans deserved better,” said Ravens Ray Lewis.

Neither team finished 1998 with a winning record although the Ravens did win four of their remaining home games. The Jaguars won the AFC Central division while the Steelers waited another three years before returning to the playoffs.