Steelers Defense Better Buckle Up their Chinstraps in Week 2

When the Steelers schedule was announced, this Sunday’s game with the San Francisco 49ers was one that many thought was one of the few easier games. The Niners had a massive amount of turnover on their roster and coaching staff this off-season.

The talking heads said the Niners were on their way down, and the Vikings were a dark horse playoff team. San Francisco responded to that on Monday Night Football by pummeling the Vikings with a style of play reminiscent of Bill Cowher’s Steelers teams.

The biggest story of the game was sophomore running back Carlos Hyde racking up nearly 170 yards on the ground, and 2 touchdowns.

Hyde is a load to bring down at 6’0″ 235 pounds, but he also has some impressive athleticism and footwork for a “power back.” This is a move that not many bruisers make…

The Steelers defense of the past couple of seasons has been the worst tackling Steelers defense that I think I’ve seen in my lifetime. Those weak stuff arm tackles aren’t going to work against this guy.

Despite all of the losses on the defensive side of the ball, the 49ers still have a lot of talent in that group, lead by NaVorro Bowman.

They say that a team takes on the personality of their coach, and new head coach Jim Tomsula is a no nonsense, former defensive line coach. The 49ers looked like a team ready to play physical on Monday night.

The Steelers defense better be ready to match that physical play on Sunday. If they come in with the lack of urgency that they’ve shown in the past, they’re going to get whooped up and down the field. 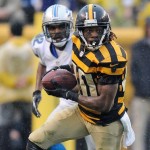