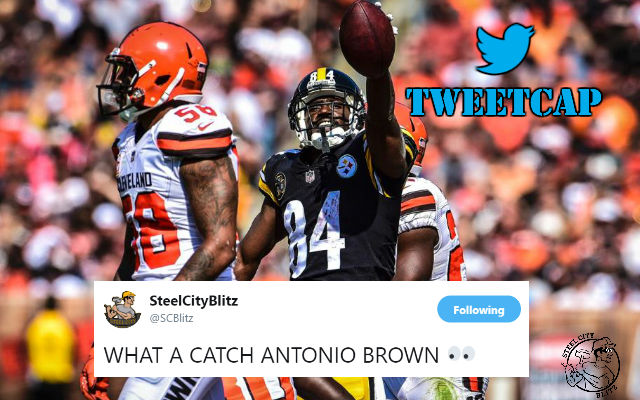 The Steelers started their season with a narrow victory over the Cleveland Browns. Ben Roethlisberger has now won more games at the Cleveland Municipal Sewage Treatment Facility than any other quarterback. The Steelers took an inordinate amount of penalties and struggled to get things going offensively when the ball wasn’t in Antonio Brown’s hands. Here’s a look back at the best tweets from today’s action.

Things got rolling quickly with the defense forcing a 3-and-out then Matakevich blocking a punt, which Chickillo recovered for a touchdown.

Life must be hard as a Browns fan….

The Cleveland Browns are officially on the clock.

That is the most Steelers-Browns start to Steelers/Browns season you'll ever see. https://t.co/iveYrh5pQU

Chickillo was 7,500 to 1 to be the first #Steelers player to score a point this season.

And then, when the offense took the field, it went into a shell.

Steelers with a bubble screen on their first play because of course.

With the offense doing nothing, the Browns were able to tie the game.

Kizer sneaks in for the TD…and I just threw up in my mouth.

Awfully nice of the Steelers to let a rookie QB playing in his first NFL game get going with some confidence..

The offense was bad in the first half. Very, very bad.

Steelers First 8 games this year, 5 are on the road.. need to travel better boys

Embarrassing man. Long time to prepare to be this inept with this much talent.

Welp. It's showing how long Bell spent with the team this off season lol

I'd say the Steelers look bad but that would be too generous.

One of these years the steelers offense will live up to the hype. Maybe.

Then the Steelers decided to try something novel: throwing to Antonio Brown

Looks like the offense can't be successful with anything but throw it to AB. Great stuff

Make that 6-102 for Brown. His 30th 100-yard game of his career, moving him past Hines Ward for most in team history #Steelers

The Steelers would mount an offensive drive before the half and get on the board. The first offensive touchdown of the year was scored by…..Jesse James!

The defense was swarming all day. TJ Watt got his first career sack.

T.J. Watt now has as many sacks as Jarvis Jones did his rookie year. #Steelers

That is a freaking brilliant play call right there. Spread it out and have TE peel off block and use LT and LG to set screen. #Steelers

Jesse James is doing everything in his power to mend the Pitt / PSU tensions across Western Pennsylvania. #HereWeGo

The defense was playing with a fire under their butts.

Official watched the play on the big screen and then threw a flag #Steelers. It was a penalty, but you're not supposed to do that

TJ Watt makes up for penalty with his first NFL interception….What a day for Watt. 2 sacks and a pick… #Steelers

The definition of redemption: Get whistled for unnecessary roughness and then pick off a pass on the next play. I see you, TJ Watt #Steelers

Anyone who doubted the TJ Watt draft pick can leave now

But of course, Road Ben.

Andddd scratch all of that. Ben throws INT number 1 of the season. Browns football. #Steelers

If you're going to throw to Martavis Bryant, you need to pass it high

Bryant got sober and came back as Limas.

Bell really making a case for that huge contact demand ?

The Browns got it back within 3 after a touchdown and a 2-point conversion where JJ Wilcox knocked himself out.

The Steelers got the ball back with under 4 minutes to go. Ben threw up a prayer to AB that somehow…well…he’s Antonio friggin’ Brown.

Best WR in the league don't @ us pic.twitter.com/tTlG9HQiKI

And then @AB84 happens. Man is this guy unbelievable.

Antonio Brown is a freak of nature.

If that's not a catch then there are no catches ever

The fact that this is debatable is why the NFL has it so wrong with this catch rule.

Le’Veon put the icing on the cake with his best run of the day.

Bell ran with no flag?

And that was all she wrote.

all the little chicks with the crimson lips go

That was far too harrowing ?#SteelerNation

Steelers give game ball to Joe Haden, who never won a season opener in seven seasons w the Browns. 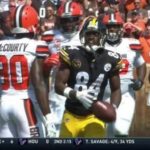 Out of Sync Steelers Escape Cleveland with a Win