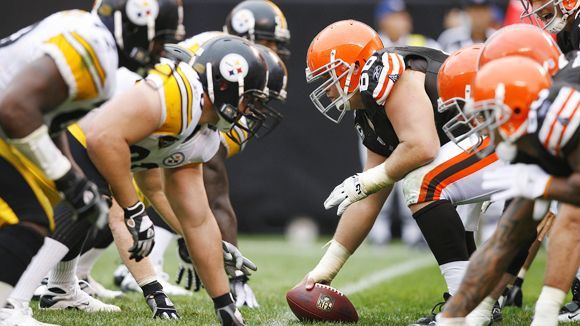 The 2017 NFL season is finally here. The Steelers will kick off the season on Sunday at 1:00pm in Cleveland.  For the Steelers, expectations are high as they will finally have a fully loaded offense with Ben, Bell, Brown, and Bryant on the field. The Browns are coming off a 1-15 season and have been purging their roster and investing heavily in draft picks and young players. Here is a look at six key stats to know that will make you sound smart at the water cooler (or at the bar, or on Twitter) in the lead up to the game.

The Steelers got off to a great start at the beginning of Tomlin’s tenure, winning their first 4 opening games. Since then, they have stumbled and won just 2 of the last 6. Those two wins were last year against Washington and in 2014 against Cleveland. On the whole the Steelers are 6-4 on Kickoff Weekend under Tomlin. The Steelers have started on the road 5 times in the last decade and won just twice. Their losses came in New England in 2015, in Denver against the newly-signed Peyton Manning in 2012, and the Baltimassicre in 2011. This will be the third time in the Tomlin Era the Steelers and Browns face off in Week 1. The Steelers are 2-0 in the prior meetings.

What is the best way to describe Ben’s 2016 home-road split? By looking at whose whole-season comparables for each split. For his home stats, his completion percentage topped Drew Brees’ 70.0%, his yards per attempt were better than Tom Brady’s 8.2, and his 319 yards per game were better than Matt Ryan’s 309. Brees, Brady, and Ryan all ranked second in the league in those respective categories. Therefore, if Ben played every game in 2016 like he played his 6 home games he would’ve been the second-best QB in the league. Unfortunately, he did not. His road splits in the same categories would’ve ranked him 26th in completion percentage (between Trevor Siemian and Colin Kaepernick), 26th in yards per attempt (between Eli Manning and Ryan Fitzpatrick), and 20th in yards per game (between Siemian and Carson Wentz). Ben’s home passer rating of 116.7 would’ve ranked 2nd in the NFL over the full season (behind only Matt Ryan’s 117.1) while his road rating would’ve been 26th (between Blake Bortles and Case Keenum). Any way you slice it, Ben played like one of the best QBs in the league at home and one of the worst on the road.

The Steelers are listed aas 8.5-point favorites heading into this game. In the last decade under Mike Tomlin, the Steelers have been favored by at least a touchdown on the road 16 times. The Steelers have gone 10-6 in those games overall but have only covered the spread five times. Last season, the Steelers went 2-1 in road games when they were favored by at least 7 points. The two wins came in Cleveland and Indianapolis and the loss came against Miami. Additionally, the score of the game has been “under” the Over/Under line 10 times in those 16 games, including each of the last 5 games. The over/under for this game is currently set at 46.5 points.

The Browns will be the only NFL team to start a rookie at quarterback in Week 1. Second round pick DeShone Kizer out of Notre Dame “won” the preseason competition over Brock Osweiler and Cody Kessler. Last year the Steelers lost two games to rookie quarterbacks. This was atypical for a Steelers team that generally prides itself on terrorizing rookie quarterbacks. During the 10 years of the Mike Tomlin era, rookie QBs are just 4-19 against the Steelers. Besides Carson Wentz and Dak Prescott winning last year, the other two wins were by Cleveland’s Brandon Weeden in 2012 and Baltimore’s Troy Smith in 2007. Weeden’s win came in a game where Charlie Batch started and the Steelers offense committed 8 turnovers. Smith’s win was in a meaningless season finale game where the Steelers rested their starters in preparation for their first round playoff game against Jacksonville.

Last season, the Steelers finished 9th in the league with 38 sacks. Nearly a third of their sacks (12 of the 38) came in two games against the Browns. How bad was the Browns offensive line last year? They allowed an astounding 66 sacks. No other team allowed more than 50. The Browns allowing 66 sacks was nowhere close to the NFL record of 104 set by the 1986 Philadelphia Eagles. (Randall Cunningham alone was sacked 72 times that season!) That said, the 2016 Browns were only the 6th team since 2002 to allow more than 60 sacks in a season. The Steelers will be starting rookie first round pick TJ Watt at outside linebacker to bookend former first-rounder Bud Dupree. The Steelers pass rush has gotten off to a slow start the last few seasons, but the Browns offensive line has been the perfect elixir for the Steelers slow starts the last few seasons.