In case you missed this yesterday, Steelers’ safety Rob Golden gave his number 21 to recently acquired cornerback Joe Haden. These things almost never happen without some form of payment. It could be a case of beer or it could be $15,000. Golden will apparently take the number 20 once and briefly occupied by Can Sutton who has been placed on IR. What number he’ll eventually take is a whole other question.

The Steelers are pretty darn healthy heading into week one with only Jerald Hawkins on the injury report. The bigger news was Cleveland’s Myles Garrett leaving practice with another ankle injury. He has now had injuries to both ankles and will likely be less than 100% on Sunday. UPDATE: Adam Schefter reports that Garrett has a high ankle sprain and will be re-evaluated in a couple of weeks.

Please make sure you visit our terrific podcast sponsor 26shirts.com/Pittsburgh. They continue to make creative and high quality shirts while always giving a third of every sale to a worthy cause.

Speaking of the podcast, we’ll be previewing the game tonite at 10pm Eastern. Tune in!

Tweet of the Day… This young man has such appreciation….

If you want to be like the greats, you must learn from the greats. pic.twitter.com/CboOwMlxoI

I’m not going to claim to know everything there is to about the Ezekiel Elliott situation but if you don’t believe TV ratings and money didn’t play a part in him being available for week one…. then I’ve got ocean front property in Nebraska to sell you.

This season the Black and Gold will travel less than any team in the NFL and once again will not travel past the central time zone. In years past, this has usually meant good success for the team.

Have a terrific day Steeler Nation!! 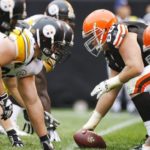