Steelers Boot Chance After Chance in OT Loss to Ravens

Who would have thought that the most important injury of the season to date wasn’t QB Ben Roethlisberger? Ever since kicker Shaun Suisham went down in the Hall of Fame Game with a season-ending knee injury, the Steelers’ kicking game has been a mess to put it lightly.

Josh Scobee missed two field goals that would have won the game for the Steelers but instead, his counterpart Justin Tucker nailed a 52-yarder more than halfway through overtime for the 23-20 Baltimore win.

Scobee was far from the only goat in this one as the Steelers’ run defense was gashed time and time again despite making a few key stops at times.  The Steelers struggled with wrapping up Justin Forsett all evening not to mention other Ravens’ players. This is an area we saw some improvement in since week one but players like Will Allen and usually sure-handed Lawrence Timmons struggled to bring guys down.

The offense under Michael Vick never seemed to get any rhythm going and it didn’t get much help from Todd Haley who couldn’t come up with anything on key third and fourth down plays that would have iced the game. Among them were a slant route to rookie Sammie Coates, a straight dive into the line by Le’Veon Bell and a throw to a covered Antonio Brown that sailed high.

Mike Tomlin can’t be left off the hook either. After choosing to go for a first down on fourth down rather than try to pin the Ravens deep, Vick was stopped well short on what looked like a played designed for the wing-t in the 1940’s.

While there were positives like the defense getting five sacks and two turnovers, the negatives were far too much to overcome. Make no mistake about it, this is a devastating loss Big Ben or not. The Steelers were essentially beaten by a ragtag bunch of receivers and defensive backs who did just enough to win.

The ten days are well needed by this team and no one needs them more than Michael Vick. I could also say the same for whatever new kicker the Steelers bring in and trust me, they will. 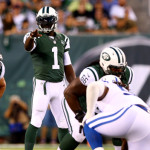 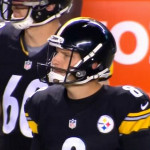 The Steelers Have to Give Scobee the Boot

So Many Places to Point Fingers as...

The Bell dive is really the only play out of those I had a issue with. The Coates slant, if Bell or Brown was there fine but if the kid catches it the game is probably over and his confidence is sky high. I disagree with you on the Brown play. I think he was open and Vick just flat out missed him. Tough game. Brutal ending but I really think with more practice time before the Chargers this offense will play better.

As always, player execution can make a coach’s decision look great or horrible. The play was there for Vick/Brown to make I agree, but why do you call something where your QB has to throw back across the field with the WR moving away from the QB? Seems like there had to be something with a higher percentage chance available. That’s my point. Also, the Vick Wing-T sweep was awful as well….

As i said earlier the power o [that’s what i called it when i coached] doesn’t work unless you got some studs at center and guard. I knew Haley would just run that play to death and he did. Bell is premier player and he should have got the ball some more down. Tomlin does not know how to manage a game With 3 minutes to go you run it down there throat and use the entire play clock. It’s not rocket science. They would have got the ball back deep in there end with under a minute worst case senerio.Two players who were nowhere to be found and must step up are Jarvis Jones and Marcus Wheaton.

After watching the game a second time. It was even clearer that play calling is what slowed this offense down more than the Ravens.On defense missed tackles is something that just has to be fixed, If this team is to have any chance of winning these two areas have to drastically improve. Also on Vicks sweep Beacham had a lineman’s dream of 3 ducks lined up in a row and didn’t even try. When you lose winnable games it really rips at the spirit of the team. I hope the coaching staff can turn this thing around by doing there jobs and not playing turtle, or repeat is inevitable.