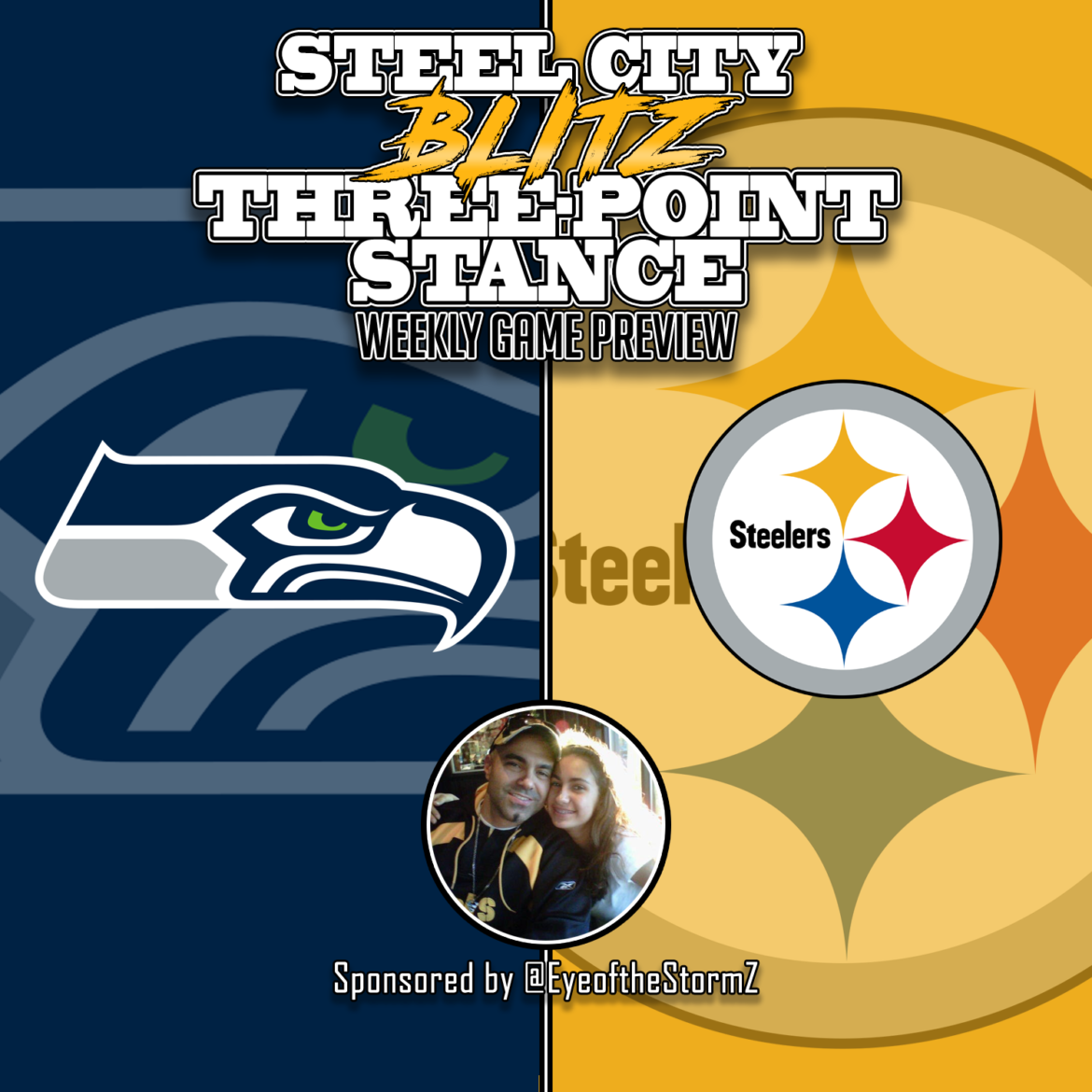 This is the Steel City Blitz Three-Point Stance. Your quick-hitting reference guide to everything you need to know about the Seattle Seahawks and Pittsburgh Steelers as the teams move on to week two of the 2019 season. This is sponsored by @EyeoftheStormZ.

What: Seattle Seahawks 1-0 at Pittsburgh Steelers 0-1

Weather: Sunny and 76 degrees at kickoff

Last Week: Seattle opened the season at home with a 21-20 win over Cincinnati while the Steelers lost in New England 33-3.

TV:  FOX Kenny Albert and Ronde Barber with Lindsay Czarniak on the sidelines.

TV Coverage in Your Area: Click here to see if the Steelers are on in your area!

This Week: Arizona at Baltimore, San Francisco at Cincinnati, Cleveland at NY Jets

What You Need to Know: Since 2001, the Steelers are 15-3 in home opening games… All-time in home openers they at 50-33-3… Mike Tomlin is 32-16 all-time versus the NFC and is 19-5 at Heinz Field… Seattle is the only team in the NFL to never score a point in Heinz Field. They have been shut out twice in two visits… In 2011, Seattle was the home opening opponent and lost 24-0… Ben Roethlisberger has a regular season record of 79-27 at Heinz Field… Sunday marks Seattle Head Coach Pete Carroll’s 68th birthday… Friend of SCB and Steelers Fan Hall of Famer Rick Holman will be leading the Terrible Towel twirl prior to the game.

What’s at Stake: Seattle has the opportunity to start 2-0 and put pressure on the Rams who play later in the day against New Orleans. The Steelers have to rebound from last week’s embarrassing loss in New England. An 0-2 start would not be season-ending but it wouldn’t be a good sign either.

All-Time Series: Tied 9-9. Steelers are 7-2 all-time at home against Seattle.

We Need to See Signs of Life. As I type I still cannot get over the total lack of energy and enthusiasm the Steelers had once they got behind Sunday night. It was as if they knew they’d have no chance so they figured “why bother?” If they show up with that same mindset on Sunday then they will get beat and they will also get booed off the field. Energy and enthusiasm are contagious. Someone needs to show up and get this team on the right track.

Take Advantage of a Weak Seattle Secondary. Last week in the Pacific Northwest, Andy Dalton threw for over 400 yards. Yes, this was on 51 attempts but he had a nice size handful of plays that went for over 20 yards apiece. He also averaged over seven yards per pass too. With the Seahawks possessing a very formidable front seven, the Steelers have to make sure they can give Ben Roethlisberger time to throw. Last week’s passing game plan included extremely quick throws or deep shots down the sideline. Randy Fichtner has to be more creative Sunday in an effort to take advantage of the secondary. Football is a copycat game so why not do what the Bengals were doing to find success?

Keep Russell Wilson Inside the Pocket. If any team is built to do this it’s the Steelers. Their interior of Cam Heyward, Stephon Tuitt and Javon Hargrave could benefit from outside pressure from T.J. Watt and hopefully Bud Dupree. Forcing the smaller Wilson up into the pocket is crucial to keeping him from being able to kill your defense on the edges. Both Watt and Dupree and anyone else who plays there must be disciplined about the rush. Wilson will make mistakes and those are typically from the pocket so keeping him there will help the Steelers’ defense.

Predictions: I’ll be real honest here; after what I saw in Foxborough I’m not real sure what to expect from this team. I am however going to be optimistic because I just can’t see them laying an egg two weeks in a row. Look for the Steelers to get their record even with a win over the Seahawks.