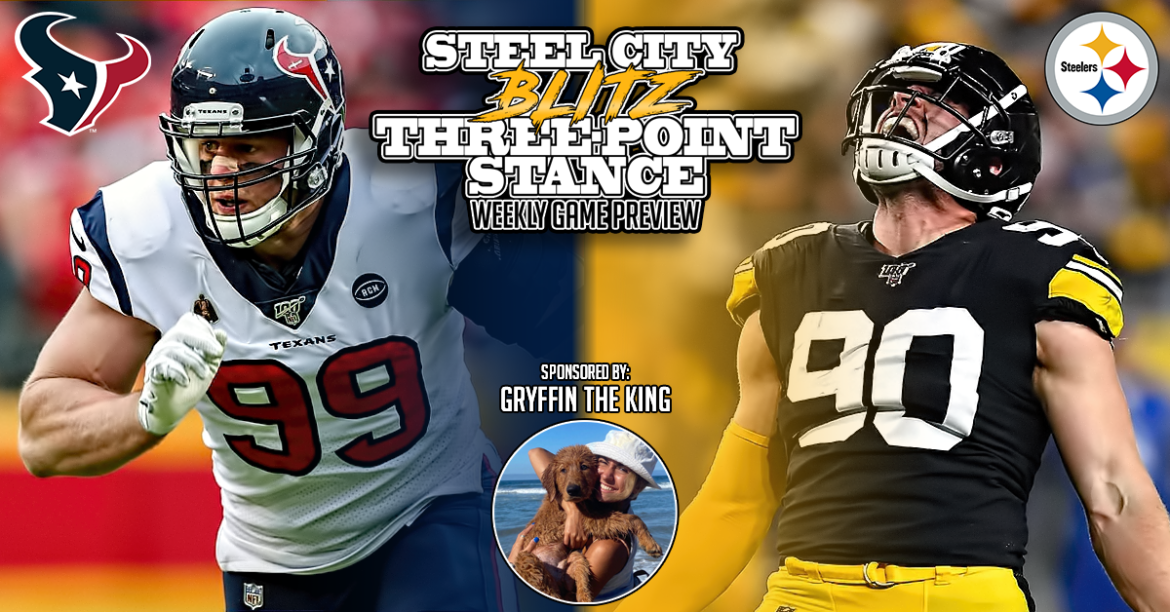 This is the Steel City Blitz Three-Point Stance. Your quick-hitting reference guide to everything you need to know about the Houston Texans and Pittsburgh Steelers in this week 3 matchup. The TPS is sponsored by Gryffin the King!

What: Houston Texans 0-2 at Pittsburgh Steelers 2-0

Weather: Sunny and 78 degrees at kickoff

Last Week: The Texans were beaten in their home opener by Baltimore 33-16 while the Steelers defeated the Broncos in Pittsburgh 26-21.

Head Official: Shawn Smith. Smith is in his third season as a head official. Last season he officiated over the Steelers’ 17-12 win against the LA Rams where there were 23 accepted penalties. Ironically, his first career game as a referee was the opening week tie between the Steelers and Browns in 2018. There were 23 accepted penalties in that game.  Get ready for the flags.

This Week in the AFC North: Cincinnati at Philadelphia 1pm, Washington at Cleveland 1pm, Kansas City at Baltimore MON 830pm

What You Need to Know: Mike Tomlin is the only Steelers’ Coach to face the Texans… Pittsburgh has opened 18 separate seasons with a 2-0 record and reached the playoffs in 12 of the previous 17 campaigns, and four times won the Super Bowl (1978, 1979, 2005 and 2008)… Ben Roethlisberger will become the all-time leader in games played for the Steelers on Sunday breaking the record 220 by Hall of Famer Mike Webster… Roethlisberger needs 1 game with at least 300 passing yards to tie Pro Football Hall of Famer Dan Marino (63 games) for the sixth-most such games in league history… Alejandro Villanueva has the third longest active streak for games played by an offensive tackle right now with 82 straight.

What’s at Stake: Houston is literally in desperation mode at 0-2 and a difficult next few weeks coming. I expect them to pull out all the stops in order to get their first win of the season. The Steelers look to keep pace with Baltimore in the North with a difficult road trip to Tennessee looming next week.

All-Time Series: Steelers lead 4-2 and are 2-1 all time in Pittsburgh.

Covering for Edmunds. Steelers’ safety Terrell Edmunds made the final defensive play of the game last week to help ice the win over Denver but he had a very poor overall game. This was something we discussed on the podcast this past week. Minkah Fitzpatrick is not making the splash plays like we expect in part because he’s covering for Edmunds who is struggling in coverage right now. The Texans possess really good speed at wide receiver and they cannot afford to let Will Fuller, Brandin Cooks or Kenny Stills to run free in the secondary. Throw in big, athletic tight end Brandon Fells and you have serious coverage issues. Don’t be surprised if Keith Butler picks up where he left off and brings Edmunds on the blitz more often than usual to keep him out of coverage.

Old School Offense. The Texans rank 31st in the NFL against the run. Granted, they had to play a very run heavy Ravens’ team in week two but there’s no reason the Steelers can’t pick up where the Ravens left off. This doesn’t mean Randy Fichtner should run James Conner every single play. In fact, I’d like to see some play-action on first down and then come back with the run. Keeping the Texans’ front seven guessing is important for keeping Ben Roethlisberger clean and for allowing our receivers to work downfield. If Benny Snell can prove he can hold on to the football then he should get some touches too in order to keep Conner fresh and to keep the Steelers in shorter yardage situations. Yes, the NFL is a passing league but being able to run the ball makes the pass even more deadly.

Contain, Contain, Contain. Deshaun Watson is going to make plays. Quarterbacks as talented as he is just will and that’s all there is to it. But the Texans’ O-Line has been a wreck giving up the most QB pressures through two weeks of the season. If Keith Butler believes his front four or five can get home without having to blitz as often as they have to open the season then that’s all the better for containing Watson. Bud Dupree and T.J. Watt must be disciplined in their rushes. Cam Heyward and Stephon Tuitt have to collapse the pocket from the inside. All four will work together to force Watson to do things he doesn’t want to do. If they don’t, then Watson will be able to create and extend plays and that’s not good at all.

Prediction: I’m not going to lie; if Houston finds a way to win this game I won’t be surprised. Desperate teams are dangerous teams and we saw this last week from a really banged up Broncos team who took the Steelers to the limit. Pittsburgh is very healthy and I believe, very hungry, to clean things up on both sides of the ball though and this will give them an opportunity to do so. The Steelers will find good balance offensively and will pressure the heck out of Watson all afternoon.