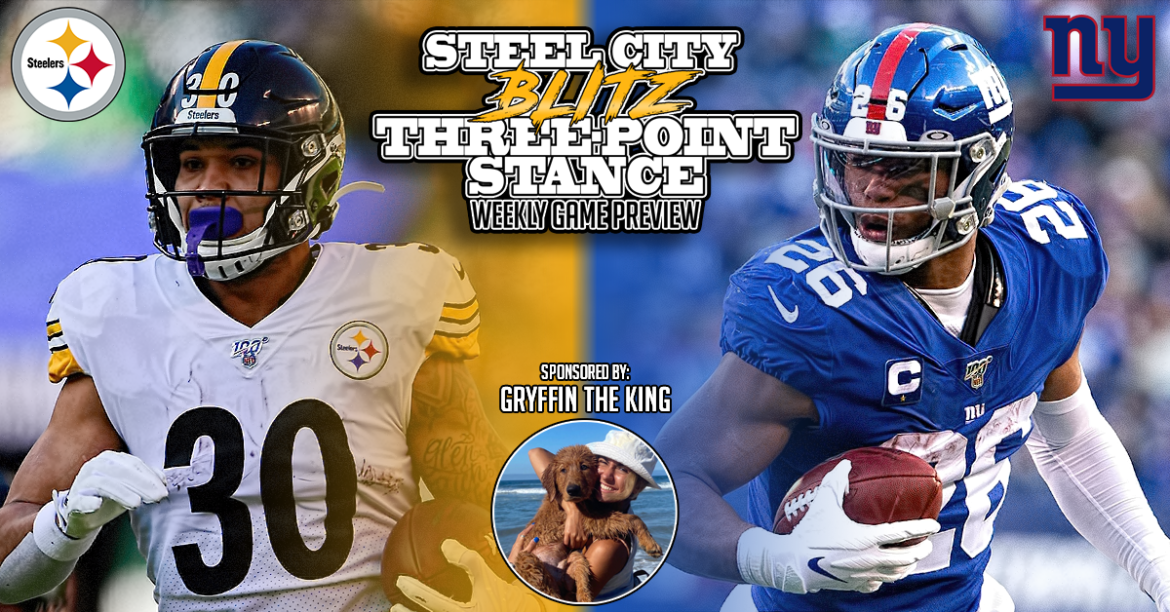 This is the Steel City Blitz Three-Point Stance. Your quick-hitting reference guide to everything you need to know about the Pittsburgh Steelers and New York Giants in this week 1 matchup. The TPS is sponsored by Gryffin the King!

Last Week: This is the opening week of the 2020 season.

Head Official: Craig Wrolstad. This is his seventh season as a head official yet he hasn’t done a postseason game in the last four seasons. In 2019, Wrolstad did not call any Steelers’ games. In 2018, he called the 23-16 win over the Ravens and he presided over the controversial 31-28 loss in New Orleans.

What You Need to Know: The Steelers are 44-38-5 on NFL Opening Weekend… They are 13-20-2 opening on the road… This is the sixth straight season the Steelers will open the season on the road. They are 2-3 in the previous five… Pittsburgh has played 72 times on Monday Night Football and they have a record of 48-24… With a victory, the Steelers would tie the 49ers for first all-time in MNF victories… Pittsburgh was 3-5 on the road last season… Mike Tomlin is 41-21 in Primetime Games… The Steelers attempted only one two-point conversion in 2019…

What’s at Stake: You’ve likely seen those stats about the number of teams that make the postseason after winning in week one versus those that don’t. A week one loss isn’t a death blow but a victory is a big step forward.

Get off on the RIGHT Foot. If I’m the NY Giants defensive coordinator, I’m taking a long, hard look at the Steelers’ Right Tackle position as my “spot of vulnerability.” Zach Banner will make his first career start there on Monday night and I have to believe it’s because he’s been better in the running game than has Chuks Okorafor. If the Steelers can run the ball effectively then it limits what the NYG will do in terms of pass rushing to confuse and beat Banner when Ben Roethlisberger drops back to pass. If the Steelers struggle to run the ball then I fear Randy Fichtner has to be prepared to use a tight end or slide protection Banner’s way more often than he would prefer. As much as Fichtner needs to call plays to get Big Ben settled in his return, he also has to set Banner up for success too. Otherwise, right tackle will be an issue.

Jonesing for a Win. Daniel Jones has had some impressive games as the QB for the NY Giants. He started 12 games last season going 3-9 but he threw 24 touchdowns and was over 3,000 yards passing. He did throw 12 interceptions and he put the ball on the turf 19 times which means if I’m Bud Dupree and T.J. Watt, my mouth is literally watering. Jones was also sacked 38 times which tied him for ninth most in the league. Obviously things start defensively for the Steelers by stopping Saquan Barkley, they have to take advantage of a sub-par offensive line and pressure Jones early and often. Giving Ben Roethlisberger short fields will go a long for his ‘return to the game’ jitters and will force new Giants’ Offensive Coordinator Jason Garrett to throw much more than he wants. Bottom line? If New York is going to win they have to do it behind a strong performance from Jones. Keith Butler needs to make sure that doesn’t happen.

Limit the Mistakes. Look. There are going to be mistakes this week. You can’t go an entire preseason without a single exhibition game and then expect sparkling overall performances. But… You do have to limit the mistakes you have. Take care of the football first and foremost. Hang onto the ball and make good decisions with it. Next, nothing stupid! False starts are going to happen. What has to be avoided are those 15-yarders for facemasks or personal fouls. Lastly, take care of things on Special Teams. This unit is always vital week in and week out but in the early going, games are often decided by miscues in the kicking game. Danny Smith’s group must have a better night than his opponent across the field. Issues here could put the Steelers in a tough situation.

Prediction: Big Ben admitted he would be “shaking like a leaf” as he returns to the game following elbow surgery. Therefore, look for a lot of James Conner early on. This will also help settle the right side of the line which has two new starters. I assume there will be a few hiccups defensively but the Giants’ offensive line is not good and I expect a dominant performance from the front four of Watt, Dupree, Cam Heyward and Stephon Tuitt. As long as the turnovers and mistakes are limited I think  we are in still for a positive season opener.