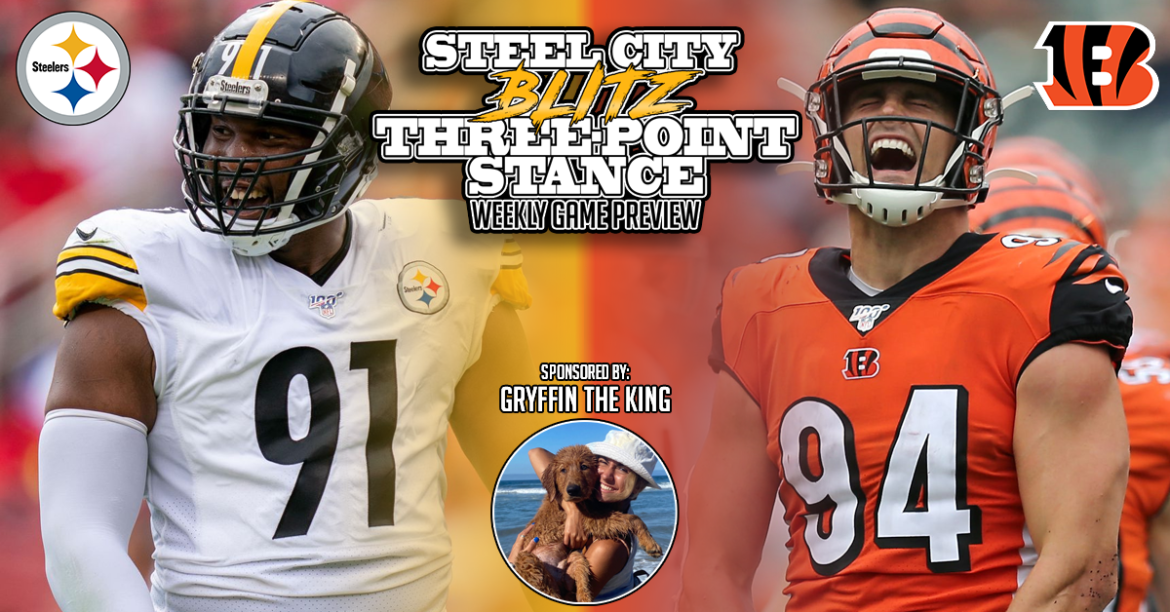 This is the Steel City Blitz Three-Point Stance. Your quick-hitting reference guide to everything you need to know about the Pittsburgh Steelers and Cincinnati Bengals in this week 15 matchup. The TPS is sponsored by Gryffin the King!

Last Week: The Steelers dropped their second straight game losing in Buffalo 26-15 while the Bengals were beaten at home by the Dallas Cowboys 30-7.

Head Official: Clay Martin. Martin is in his third season as a head official. Last time the Steelers saw him was a 2019 win over Cleveland in which his crew had 15 penalties accepted. This is the only time he has served as the head official in a Steelers’ game.

What You Need to Know: The Steelers now hold the all-time for record for having at least one sack in 70 straight games… Bengals Head Coach Zac Taylor is 4-24-1 all-time in his one plus seasons and he is 0-3 against the Steelers… A win would give the Steelers their 11th 12-win season in the last 50 seasons… Ben Roethlisberger is 14-2 all-time in Paul Brown Stadium and is 25-4-1 all-time in the state of Ohio…The Steelers are 49-24 all-time on Monday Night Football. They are 22-19 away from home and are 8-3 in MNF games versus the Bengals.

What’s at Stake: A win over the Bengals OR a loss by Cleveland clinches the AFC North Division title for the Steelers.

1. Get Back to Basics. Let’s be very, very honest here. The Cincinnati Bengals aren’t a good football team. Can they beat the Steelers? Hell yes they can especially if we continue to play offensively the way we have in recent weeks. That said, this should be the perfect opportunity for this offense to get itself back on track. It starts up front where the Steelers have now heard for a week how “soft” they’ve been on the O-Line. If this unit really is offended by such comments then let’s see them prove it! Secondly, stop worrying and thinking about the drops. Just play the damn game the way you have your entire lives. Look the ball in, secure it, then make your move. Lastly, I’d like to see the defense cover better. It was a nightmare in the second half Sunday Night and I understand injuries were part of that, but a week should be enough time to get some of that corrected.

2. Fix the ‘Third Phase.’ As bad as the offense has looked in recent weeks, Danny Smith’s Special Teams Unit hasn’t exactly been stellar either. Kick and punt coverages have been lacking. Guys are over-running the returner, guys are missing tackles and they aren’t getting off blocks. But no one is making splash plays either. No blocked kicks or blocked punts and there’s been little to no creativity which is needed when your offense is struggling. Some of this could be attributed to guys being shifted around so much due to injuries but come on. It’s high time to step up and not let this part of the game get us beat!

3. Bring the Hammers. The offense is struggling. The defense is facing a third-string QB with little experience and there’s little behind him with both Joe Burrow and Brandon Allen out. The Bills did a terrific job last week in pass protection especially in the second half. I also credit some of that due to the loss of Bud Dupree which meant T.J. Watt faced double-teams and chip blocks all night long. I do not want to see Keith Butler playing it safe Monday night. They need to get after the quarterback and I don’t care where that pressure comes from. I do not have to say that the Steelers will stop the run first because that’s a given, it’s what they do but the only offensive threats on this Bengals’ offense are in the receiving corps and if Ryan Findley can’t get the ball to them then all the better.

Prediction: As of this writing, Vince Williams has yet to be removed from the Covid list which means he could miss a second straight game. Even if he is removed there’s no telling how healthy he might be. His importance to the defense is not a secret. Therefore, Avery Williamson has to pick up the baton and lead this defense. Having Joe Haden back will help on the back end with communication. The offense has to take care of the ball and has to score touchdowns, not kick field goals. James Conner isn’t 100% and may not even play so someone HAS to pick things up in the backfield and don’t be surprised if you see a lot of Jaylen Samuels. This is for the division title and with two very good opponents on the horizon, if the Steelers don’t take care of business in this one then we are suddenly talking about a meaningful game in Cleveland which could be used for rest. I do not expect a change from what we’ve seen in recent weeks but I expect enough to get by. 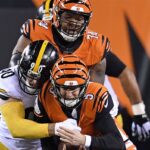 I look for the Bengals to stack the box and say have at it. Look for the Steelers to throw deep early then stop. This will be an interesting game if the Steelers struggle, then our worst fears are realized. That being we are very one dimensional and the league knows it.

3rd string Ravens, Washington now the Bengals. Until Ben proves he can drive his throws downfield with accuracy we will continue this same scenario. the short passing game is great if you can draw the defense up and beat them deep. But we’re at the point where any team in the league can say bring it on we are stacking the box until you prove it. If you look at my preseason post i did predict this would happen i just didn’t think the league would take this long to catch on to Ben’s weak arm.