The Pittsburgh Steelers received some good news earlier this week when long-time nemesis Geno Atkins was put on Injured Reserve. His absence will make the offensive line’s job that much easier but then again, nothing has been easy for this unit. With Matt Feiler down with a pectoral issue and Kevin Dotson nursing a sore soldier, the left guard position is in serious doubt. To be clear, Dotson could play this week but as of right now the job will fall to JC Hassenauer is who usually a center. The former Alabama product is a quick study who shouldn’t have any issue making transition mentally. How he holds up physically is another question. The Steelers did sign guard Danny Isadora from the Kansas City practice squad this week but it’s hard to tell how up to speed he can get. I’m of the opinion that the offense should be able to get by this week. If they can’t then we have much bigger problems with Indianapolis and Cleveland ahead. I’ll wait and see where things are after Monday night but whoever is in there at left guard has to pick things up. No doubt about it.

We had an unusual start to the Steel City Blitz Steelers Podcast presented by DEK Roofing last night. With Ian getting kids to bed and Ben having technical issues I went solo for about the first five minutes or so but rest assured the guys jumped in and we had another great show. In fact it was our 200th episode.

Wait a minute….are we unleashing hell in December again??

Injury Thoughts… It’s very possible the Steelers could be facing third string QB Ryan Findley should Allen not be able to go Monday night… Today is a big day for Dotson. If he’s a full participant then I expect him to start… Joe Haden practicing is a big step but he still hasn’t cleared concussion protocol yet. To say this defense needs him is an understatement.

NFL Commissioner Roger Goodell is reportedly in favor of a two-game preseason starting next year. Not surprisingly Jerry Jones and Robert Kraft were against this. And why shouldn’t they be? They get to charge fans full price for meaningless football where the top stars rarely play anyhow. The issue may be taken up again after the season ends but it’s yet another example of how ‘player safety’ always takes a backseat to money. 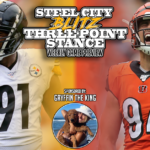