The rivalry returns part two. The Pittsburgh Steelers and Baltimore Ravens meet for the second time this season and there is plenty on the line for these two rivals. Our ‘Three-Point Stance’ is proudly sponsored by ‘Nail the Number.’

Weather: 30 degrees and cloudy at kickoff. Winds could be an issue gusting to over 15mph.

Last Week: Baltimore beat the Detroit Lions at home 44-20 while Pittsburgh went on the road to defeat the Cincinnati Bengals 23-20.

What You Need to Know: The Steelers are now 9-0 when they score 20 or more points… Ben Roethlisberger appeared in his 197th game Monday night tying Gary Anderson for fifth most in Steelers’ history…Antonio Brown set a record for the most receptions in a five-year span with 569 besting Marvin Harrison by six… Ryan Shazier established a career high in tackles for the season with 89 prior to leaving in the first quarter… The Ravens have won three straight… For the tenth time in his career, Jordan Berry landed three punts inside the 20-yard line in a game.

What’s at Stake: The Ravens must keep winning. Right now they have the sixth seed in the AFC Playoffs but with the muddle in the AFC West and battle at the top of the AFC South there is little room for error. The Steelers can clinch the AFC North with a win and can clinch a postseason berth with a Buffalo loss earlier in the day.

Stop. the. Run. Pittsburgh has been very much “bend don’t break” the last several weeks when it comes to stopping the opponent’s running game. The Packers had some success and so too did the Bengals. Stephon Tuitt and Javon Hargrave have to do a better job of splitting those double-teams than they did last week. Forcing the Ravens into 2nd and 3rd and long situations is a huge key into forcing Joe Flacco into mistakes and taking sacks. If they are constantly in 2nd and 3rd and short, then he becomes much more dangerous especially using play-action. Without Ryan Shazier, Arthur Moats and whomever else fills in, must not worry about “being Shazier.” They need only to do their job.

Take Care of the Pigskin. The Baltimore Ravens have won three-straight games in large part due to their defense and special teams’ units creating turnovers. The Steelers cannot afford to give the Ravens free possessions and especially cannot give them short fields. Is it fair to say that Ben Roethlisberger typically turns it over once a game? Ya, that’s fair so he has to be more careful with the ball. Same can be said for anyone toting the pigskin for the Steelers on Sunday night. Turnovers are the quickest way to secure your own defeat.

Step In and Step Up. There is not a player on the Steelers’ roster that can do what Ryan Shazier is capable of doing. Therefore, no one should try to “be him” in his stead. Rather, guys like Arthur Moats and recently signed Sean Spence must just play good, sound football. But it goes further than that too. Vince Williams has to be at the top of his game and the guys along the defensive line must be too. In short, everyone on the defense has to do his part to make up for the absence of Shazier.

Predictions: Four of the Steelers’ last five wins have been by an average of 3.5 points. When they beat the Ravens, their margin of victory is quite similar to that. I expect another tight game until the end. Steelers 27 Ravens 23 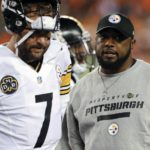 Grading the Steelers at the Quarter Pole for 2017