It never gets old telling you “good morning” following a Steelers’ victory.

The Pittsburgh Steelers are your 2017 AFC North Champions following their 39-38 win over Baltimore.

Remember when people wondered if Ben Roethlisberger was washed up following that five-pick game against Jacksonville? 506 yards and no turnovers against a defense that had been creating a ton of them.

Let me get this out of the way right now… the officiating was bad last night for both teams. The most egregious calls came on pass interference plays. Much like the NFL struggles with what a “catch” is, they are clearly struggling with what pass interference is as well. My understanding is that there is to be no contact after five yards. Ya, that’s only the beginning of the problems.

Tweet of the Day #1… This is awesome. Juju watched the game from home… While wearing his helmet the whole time.

@TeamJuJu I think I found you tonight. See you soon brother! Hat & T Shirt will be waiting for you in your locker! pic.twitter.com/FCxKs1G3nL

Huge game for Jesse James and it couldn’t have come at a better time. With no JuJu Smith-Schuster, he provided Big Ben with an outlet all night long. Vance McDonald I could not feel worse for… He made some really nice plays out of the gate but left with a shoulder injury.

I think we are all holding our collective breath today. Le’Veon Bell did not quite look the same when he returned from that shot to his knee. I’m hoping it’s nothing.

Martavis Bryant looked like anything but a kick returner last night. Not sure what happened but he looked so good last week and then… Not so much. I expect JuJu to resume that responsibility.

Does Antonio Brown “push off?” Yes, he does and on rare occasion it gets called. That said, for all the hand-fighting that officials allow outside the five yard area I see no reason for him to stop doing it.

The Steelers’ offensive line was very good last night in protecting Ben Roethlisberger. There were a few pressures and sacks but when your QB drops back 70+ times that’s going to happen. My bigger concern is the lack of run blocking. Ben Roethlisberger cannot afford to throw the ball that often especially if the defense is going to continue to struggle. Run the no huddle, take your time, get Bell going and throw off of that.

Tweet of the Day #2… Former Steeler Trai Essex having some fun.

I doubt we’ll ever get any kind of serious explanation but the Steelers really botched the time management at the end of the game. While I appreciate the aggressiveness, the Steelers could have run down the clock and gotten out there on the kick rather than putting it in the hands of the beleaguered defense. Thankfully, it all worked out.

Antonio Brown likely won’t win it; no receiver ever has, but he deserves MVP consideration. I didn’t say he should win it, but if he doesn’t finish in the top 5 there’s a huge problem.

If you didn’t realize how important Ryan Shazier is to the Steelers’ defense after last night then I don’t know what to tell you. The linebackers struggled ALL night getting off blocks and getting into the proper gaps. I’m giving Sean Spence a pass since he’s been here less than a week but the rest? Gotta do better.

Sean Davis had a wonderful interception early in the game but that cannot mask his horrific tackling and poor coverage last night. And what in the hell was he doing on the sidelines standing there while Arthur Moats needed help with the tackle?

Much credit to Eli Rogers. He made some very solid catches last night to keep the sticks moving.

Stephon Tuitt is not getting the push we are used to seeing. Wonder if he isn’t hurt?

Do you realize how big that win was last night? A loss would have put the Steelers only a game ahead of Jacksonville who owns the tie-breaker with Pittsburgh. With New England coming in, the Steelers could have found themselves being a third seed quite easily. 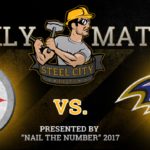 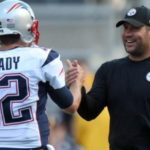 The Week You’ve Waited for is Here Steeler Nation