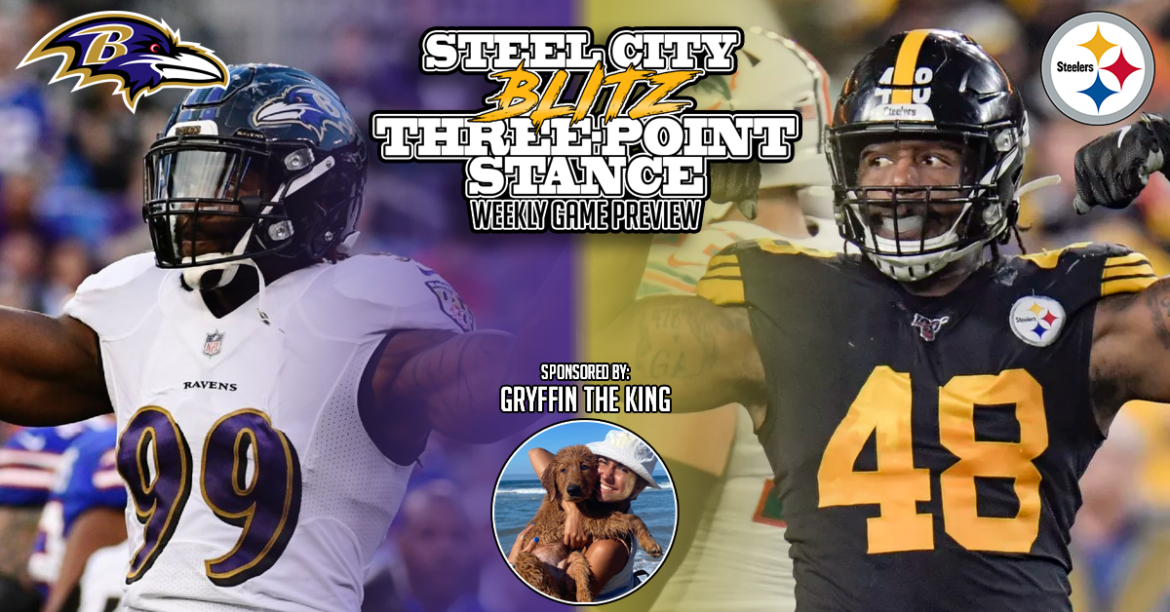 This is the Steel City Blitz Three-Point Stance. Your quick-hitting reference guide to everything you need to know about the Naltimore Ravens and Pittsburgh Steelers in this week 12 matchup. The TPS is sponsored by Gryffin the King!

What: Baltimore Ravens 6-4 at Pittsburgh Steelers 10-0

Last Week: The Ravens dropped a 30-24 OT game to the Tennessee Titans while the Steelers defeated Jacksonville 37-3 in the Sunshine State.

Head Official: Ron Torbert. He is in his sixth season as an NFL Head Official. He officiated the Steelers’ win over Philly earlier this season which saw 17 accepted penalties called. There were many questionable calls and non-calls during that game.

Key Injuries/Game Status (courtesy steelers.com) PIT: CB Joe Haden (Knee) – Questionable, RB Jaylen Samuels (Quadriceps) – Out  BAL: We know as many as 22 players are listed on the Covid/IR List but do not know about the status of available players. [Update] Due to the most recent change, J.K. Dobbins and Mark Ingram are available to play.

This Week in the AFC North: Cleveland 27 Jacksonville 25, NYG 19 Cincinnati 17

What You Need to Know: The Steelers extended their streak of sacks in a game reaching 67. They need a sack in the next two games to tie the record of 69… Pittsburgh lead the NFL in takeaways since 2019 with 59. They have forced at least one TO in 23 of their 26 games… With James Conner on the Covid/IR list, this will be Benny Snell’s first start of 2020… The Ravens have not practiced since BEFORE their loss to Tennessee.

What’s at Stake: The Steelers can maintain their lead in the AFC North with a win and of course, remain unbeaten on the season. Baltimore is in jeopardy of falling out of playoff contention with a loss.

Expect the Unexpected. With John Harbaugh’s team now fighting for it’s playoff lives, no coach worries me more when it comes to gambling and calling trick plays. The former special teams coach is a master of exposing other team’s weaknesses (Steelers’ ST Coach Danny Smith is out for this game due to Covid). Don’t forget, this is a guy who once ran a fake extra point against the Steelers while up by multiple scores. But it goes further than just special teams. I fully expect to see gadget plays on offense especially since they’ll be without their top two running backs. I expect to see lots of screens to start to take advantage of the Steelers’ aggressiveness and if those are successful the gadgets will roll off of them. Stay focused Steelers!

Hot Start. For whatever reason, the Steelers have struggled to get going early in games recently. I think this is a game where if they can do that it will go a long way towards a win. I say this because The Ravens are already struggling. They are going to be down several players and you have guys whining on Twitter about having to play under these circumstances.  There’s no better time than the start to pile on and build from there. Another slow, lethargic start gives the Ravens hope and keeps them in the game longer.

No One Cares About Covid. When this game kicks off, no one will care who is playing for the Ravens and no one will care who is suited up for the Steelers either. These are pro football players and they will be expected to perform at a high level. I am in no way suggesting that the loss of players like Lamar Jackson, Mark Andrews and Matthew Judon won’t make an impact because it will. But if the Steelers especially think the Ravens are just going show up and roll over for them they can forget it. These are unusual times as we all know but I don’t see how Mike Tomlin’s team can show up in any other way than totally focused.

Prediction: I am of the mind that this game shouldn’t even be played. Both teams are at disadvantages and the Steelers especially will be at one for the following week. Be that as it may, this game appears like it’s going to happen and as I said above, no one will care once the ball is kicked off. The Steelers have a decided advantage on both sides of the ball and they had better take advantage. I believe they will but the Ravens aren’t going to go easy. Look for a close game to slowly go Pittsburgh’s way in the second half.

SCB Steelers Quick Hitters: The “This is Weird” Edition