The Pittsburgh Steelers come into their home opener off a less than pretty 21-18 win. The Minnesota Vikings meanwhile were impressive in their home opening win over New Orleans. Everything that you need to know for this game is right here.

The Three-Point Stance is sponsored by Nail the Number 2017. If you haven’t played then what are you waiting for? Get your pick in by Noon ET Saturday.

What You Need to Know: T.J. Watt was the first Steeler since LaMarr Woodley to have two sacks and an INT in the same game… William Gay continued his streak of games played for active NFL defensive backs. He’s now up to 161 in a row… Ben Roethlisberger now ranks ninth all-time in passing yards in NFL history after passing Fran Tarkenton… David DeCastro has the 4th longest active streak in the league for guards with 57 straight starts.

What’s at Stake: With the Ravens hosting the Browns, a win over Minnesota may be necessary to stay atop the AFC North with Baltimore. For Minnesota, they need to keep pace with both Detroit and Green Bay who head into the weekend 1-0.

Flags Must Not Fly. The only flags I want to see flying on Sunday in Heinz Field are the ones that are supposed to be flying. Ya know? Old Glory? Steelers’ flags? Not the ones thrown from the guys wearing stripes. The penalties in the win over the Browns were beyond ridiculous and many were drive-killers or drive keepers depending upon which side of the ball they occurred. The Vikings are too talented to have these types of transgressions again and still expect a positive outcome.

The mental mistakes have to be eradicated and at some point, the Steelers are going to have to realize that aiming high on offensive players is going to get called every time. James Harrison figured it out so I highly suggest guys in the secondary figure it out too. The bottom line is the penalties have to stop.

Get Bryant and Bell Involved Immediately. If the Steelers wait until their fifth drive to throw deep to Martavis Bryant again then someone will finally need to check Todd Haley’s head. Furthermore, Le’Veon Bell needs touches immediately whether on the ground or through the air, he needs to get his motor up to speed early rather than late.

Antonio Brown has already proven he’s in mid-season form. Imagine what he can do if Bryant and Bell are both contributing big plays. Coverages will be forced to change. Safeties will have to inch closer and closer to the line of scrimmage and so on. Haley can’t wait to get these two going and if he attempts to do so via a ton of wide receiver screens then good luck avoiding the boos.

Cover. The. Slot.  Want to discuss a recipe for disaster? A team with an excellent slot receiver versus the Pittsburgh Steelers’ defense. Adam Thielen is just such a player for the Vikings. He’s coming off a very good game against the Saints where he caught nine passes for 157 yards. Four of his nine receptions went for first downs as well. Minnesota will look to isolate Thielen on linebackers and safeties as often as they can and when the Steelers do get a nickel on the field will they go with William Gay or Mike Hilton?

Adam Thielen is NOT Julian Edelman but he’s pretty darn close and I have serious concerns if Gay can stay with him. The Steelers will need to use a variety of coverages and cover options in my opinion to create problems for Thielen. Disrupting his release would be nice as well. If Keith Butler can’t solve Thielen then it will be a long day for the secondary.

Predictions The SCB Crew is chiming in this week with their selections! Last week everyone nailed the Steelers’ victory. 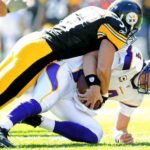