This is your ultimate gameday guide to the Pittsburgh Steelers and the Indianapolis Colts. Our Three-Point Stance is sponsored by ‘Nail the Number’ which could return in the final few weeks of the season!

Where: Lucas Oil Stadium Indianapolis, IN

Last Week: The Colts defeated the Houston Texans 20-14 while the Steelers enjoyed their BYE week.

What You Need to Know: The Steelers are 5-0 when they lead at halftime… They are 4-1 when they score first… The Steelers are 4-1 on the road in 2017… William Gay has played 168 straight games. The longest active streak among NFL defensive players… Cam Heyward now has 30 career sacks… Ben Roethlisberger has now thrown 10 touchdown passes in all 14 of his NFL seasons… Pittsburgh is the first team in the NFL to reach 450 regular season victories since the 1970 merger.

What’s at Stake: In the simplest terms, the Steelers need to keep winning. With Jacksonville owning the tie-breaker over them and seemingly in-line to win the South, the Steelers must stay ahead of them but must also keep the Patriots in sight as well. For the Colts, it’s about survival. Can they leap-frog the Texans to get into second place in the South?

Don’t Force It. Let’s be honest here; Todd Haley’s offense under Ben Roethlisberger has had some HUGE days in recent years against the Colts. Their defense is already missing Malik Hooker and Vontae Davis plus several others. It’s understandable that anyone who plays offensively for the Steelers will want to have a big day. That can happen but there’s no need to force things. The offense needs to just do what it knows it can which is possess the ball and take advantage of favorable matchups. This is not the place to get cute or try and out-think the Colts.

Make the Colts’ One-Dimensional. This is not a secret. The Pittsburgh Steelers believe in forcing opposing offensives to abandon the running game in favor of a pass-only offense. Jacoby Brissett is not an awful quarterback. He’s completing over 61% of his passes and has 7 touchdowns and 4 interceptions through nine games. Still, the Steelers want to put the ball in his hands and force him to make the throws necessary to beat them. The secondary must account for T.Y. Hilton who has either had monster games (over 150 yards receiving) or pedestrian ones (less than 60). The bottom line here is that the Colts’ offensive line is not good and if you can get them on their heels early it allows the Steelers’ to pin their ears back and get after Brissett.

Positive Red Zone Steps. I don’t need to go into the horrors of the Steelers’ red zone offense this season. If you watch this team even a little then you’re familiar. What we need to see over the second half of the season is improvement plain and simple and it has to start against the Colts. Martavis Bryant’s height and athleticism must be utilized. The same could be said for Jesse James who had two RZ scores in week one. Overall, the combination of creative play-calling and execution ust get better starting this week. 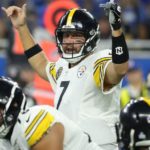