By land, by sea or by air. Apparently Antonio Brown has just one of those options left after arriving to Camp in a helicopter yesterday. After arriving in a custom Rolls, the helicopter appears a natural evolution. As St. Vincent is landlocked I’m not sure how he’ll accomplish the “by sea” part.

Not to be outdone yesterday was Linebacker Vince Williams who showed up in his truck dressed like Stone Cold Steve Austin while jamming his entrance music. Well done VWill!

If you read ‘Quick Hitters‘ this morning then you caught my reaction to Eli Rogers re-signing with the Steelers.

I have to tell you that I’m not going to make a huge deal of this but I have to discuss it. Yesterday, Mike Tomlin excused several players from the conditioning test. Among them were Cam Heyward, Ramon Foster and Maurkice Pouncey. Tomlin cited their work during the offseason and the fact they “he knows what they are capable of” as to why they didn’t have to compete. Personally, I don’t like this because it feeds the narrative about Tomlin being too soft on the players. If he feels this is the right move, then by all means stick to it. My approach would certainly be different.

After Camp, head over to our ‘Tidbits’ sponsor Taps N’At for a cold brew and great food! 152 N. Bank St in Derry!

We start getting our first look at the quarterbacks today and I caution everyone that you can’t jump to conclusions. Too often a pass will go incomplete and immediately the “he sucks!” thoughts creep in. Did the receiver drop it? Did the receiver run the correct route? Did the QB have a clean or mess pocket? Regardless of who you think backs up Ben Roethlisberger you have to be objective and be able to pay attention to what’s going on.

One other note of caution… You will see and hear about several guys having great camps. Take those with a grain of salt. Justin Hunter has a great camp EVERY year but contributes little during the regular season. When the pads are on and the preseason begins then we can start talking more seriously.

On to the Stairway to Seven! 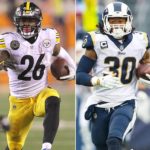