Yesterday was an important day for the Steelers in terms of health. Guards Ramon Foster and B.J. Finney were both full participants as were DeAngelo Williams and Javon Hargrave. We will have to keep tabs on all four as we head into practice today and tomorrow but having all four ready to go is huge. Regardless, things are looking good for the Steelers’ health!

Certainly each of those four men has their own importance but I think if DWill can play then he could really make this offense even better. I say this because if he can take a few of the carries off the back of Le’Veon Bell then that keeps Bell fresher for the stretch run. Even if Bell is still on the field and in the slot or split wide, that’s a little bit less punishment on his body.

I was told the name “Michael Floyd” was uttered around the Steelers’ front office yesterday. Floyd of course was released by the Arizona Cardinals yesterday following his drunk driving arrest. It’s no secret the Steelers could use a number two receiver but I also understand how it would “look.” With Bell and Martavis Bryant embarrassing the Steelers why would they take yet another risk? Whether the front office is seriously considering signing him I do not know but let’s just say it “has been discussed.”

Have you entered this week’s ‘Nail the Number‘ yet? $2,300 is on the line plus an autographed backpack and tickets to a future game.

Tweet of the Day… I share this for two reasons. One is for the obvious. Two is for the fact that responses to this tweet were pathetic. Some fans of other teams get their feelings hurt so quickly.

#Steelers WR Antonio Brown has 619 catches in his 1st 99 reg-season games – an NFL record for the most catches in a player's 1st 100 games: pic.twitter.com/RjZ7xl0Wwp

Make sure you’re getting my daily Steelers’ updates via bumpers.fm  It’s an easy way to get my thoughts on the latest Steelers’ news and it takes just a few minutes.

New SCB contributor Brian shared his thoughts on the upcoming game with the Bengals.

The rotation at outside linebacker has certainly been smoothed out as James Harrison and Bud Dupree have taken the bulls by the horns. Still, those other guys have to be prepared to get some snaps. Dupree seems to be back in form but at Deebo’s age, he’s going to need a few plays of rest at time in order to keep his explosiveness.

The Bengals may be out of the playoff hunt but Geno Atkins is having a great season. He will be a force to be reckoned with on Sunday for the interior of the Steelers’ offensive line. 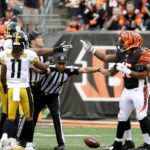