SCB Steelers’ Quick Hitters: The “Who Met Who?” Edition

The NFL Combine wraps up today in Indianapolis and so far it has been filled with the usual ups and downs for prospects. The Steelers have met with many, many  of these ‘said’ prospects at many different positions so far and while many on Twitter will have you thinking they are drafting EVERY ONE OF THEM, you have to find perspective. They have 15 minutes with each guy so getting a good feel for the prospect as a person is not easy. The private workouts and pro days will allow the Steelers to narrow these guys down more. The Combine is a great start but it’s far from the be-all, end-all.

The performance of Shaquem Griffin has been incredibly inspirational. The Central Florida Linebacker with only one hand ripped off an incredible 40-yard dash time then, using a prosthetic, did 20 reps of 225 pounds on the bench. Now for the realistic part… Whatever team drafts him will get a hard-working and dedicated player but conversations about just how much he can do for said team have to be had. I’m in no position to doubt him and I’m rooting for him. But the NFL is a business too.

Tomorrow is a big day in the world of the Steelers and Le’Veon Bell. The Steelers have to decide whether to tag him or not for 2018 and at this point I believe that’s exactly what they will do.

Partly that Mike's play has slipped, partly that he's blocked half of Steelers Twitter.
Never had any interaction w/ him aside from once complimenting him for charity work & I'm blocked. He's running searches for his name & blocking. People are gloating & piling on as a result.

I say “interesting” for two reasons. One, I noticed that he says “was” suggesting his Steelers’ career may be over as many have suggested. Two, Vince is a smart guy which is why he “favorited” this reply from our Ben Anderson.

Here’s the latest on Martavis Bryant. Since Kevin Colbert told steelers.com’s Bob Labriola and Missi Matthews that “you never say a player trade will never happen,” the phone has indeed been ringing. Now earlier that day, Colbert told the reporters that they were not actively trying to trade Bryant. That is in fact correct. But as I’ve stated before, you always listen to offers especially in this case because the Steelers will not be bringing Bryant back in 2019 so why not get something for him now? Especially if that “something” is higher than a third round pick.

Based on what I’ve seen of the Combine, the Steelers will have some options at pick #28. I’d put linebacker, defensive lineman and defensive back as the top possibilities there.

Yes, the Steelers met with Louisville QB Lamar Jackson. This does not, I repeat, DOES NOT, mean the Steelers are going to draft him. What it means is that if he should be there somewhere in the draft and they feel good about him and nobody else at the point… Then maybe they take him. I’m already on record as saying I do not believe the team will draft a QB this year but I’ve been wrong before. 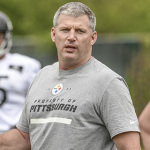 Is a Culture Change Coming to the Steelers’ Locker Room?