SCB Steelers’ Quick Hitters: The “Where Do They Come From” Edition

Like some of you, I read the chats each week over at the Pittsburgh Post-Gazette website. The two most entertaining are those of Gerry Dulac and Ed Bouchette. I say “entertaining” because I honestly can’t believe some of the questions that are asked. Here are some examples: “Why do people care so much about Steelers’ football in the offseason?” Seriously? “Do you think the Steelers will open the NFL season on Thursday night in Foxboro?” Ugh. It’s common knowledge the Patriots play in Heinz Field again this year. “Do you think the Steelers have a chance to win the Super Bowl next season?” I give up. I swear Dulac and Bouchette make some of these questions up to entertain themselves.

Our Draft Journals coming hot off the presses everyday now. Make sure you check out the ‘Steelers Draft’ category on the homepage.

Ian Rapoport of the NFL Network (and most notably of false Big Ben is being traded tweets) said yesterday that he believes if Le’Veon Bell was going to need groin surgery he would have had it already. Apparently Rapoport is now a doctor… Bell wouldn’t be the first guy to try and let an injury heal only to need surgery later in the summer. (See Bud Dupree)

Tweet of the Day… Senquez Golson has had enough of “sources.” The problem is, if everyone named sources there wouldn’t be any.

"Sources" the biggest snitch in America.Everytime I look up there it is again "Sources" said… Can someone please tell me who "Sources" is? https://t.co/HDxbuK8GTf

With this quarterback class leaving a lot to be desired, I really believe the Steelers will focus on a potential replacement for Ben Roethlisberger in the 2018 Draft.

My thoughts on James Harrison returning to the Steelers.

I’ve seen several scenarios discussed about Patriots’ QB Jimmy Garappolo being dealt for as high as a first round draft pick. I’m not suggesting he can’t be a decent NFL starter but that’s too rich for my blood. He’s started four total games in his career and while he looked good, so too did Jacoby Brissette when replaced him. Bottom line? I’m not giving up a first rounder for any backup QB. 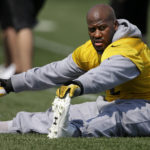 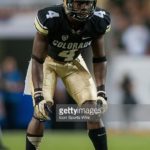