SCB Steelers Quick Hitters: The “When You Say Nothing At All” Edition

My wife and I are big fans of the late country singer Keith Whitley. He was an incredible singer/songwriter who wrote a song called, “When You Say Nothing At All.” Since yesterday’s final Mike Tomlin press conference of the 2020 season that’s the tune I’ve had in my head. I honestly do not know why Tomlin even bothers. Heck , I don’t know why the media even bothers. Much like the rest of his pressers, Tomlin indicated very little in the way of specifics. He talked about “change” which I wrote about yesterday, but he didn’t address much in the way of ‘how.’ It isn’t uncommon for him to stay quiet about players -those things are still being worked out- but at the same time it would be nice to hear more than “we didn’t get it done.” I’m not naive; I know how Tomlin does things so no, I’m not surprised he says nothing when he speaks. It’s the way coaches have done it for a long time and I don’t see it changing.

We recorded episode 204 of the Steel City Blitz Steelers Podcast presented by DEK Roofing Inc last night and it was easily our longest show. We are just as frustrated as the rest of you and the podcast bears that out. We discussed the game at length and then turned our attention to Ben Roethlisberger, JuJu Smith-Schuster and other offseason storylines.

Tweet of the Day… This is so true. Big League Chew was awesome!

The Worst Weekend Ever

I don’t know about you but when the Steelers get bounced from the postseason that very next weekend is always tough for me to handle. Part of it is because I know the team that beat us is still playing but it’s also that I probably haven’t quite accepted why they lost. Last week in the wild-card round I was 4-2 on my picks missing on the Rams and of course the Steelers. This weekend I like the Ravens to win in Buffalo. I like the Packers over the Rams. Give me the Chiefs over the Browns and I’ll go with Tampa Bay over New Orleans.

Is often hard to find. Case in point was yesterday when a couple of twitter accounts were declaring that Kevin Colbert was close to leaving the Steelers to become the GM of the Detroit Lions. I understand, they felt like they had credible sources and heck, maybe it happens anyway. But when word came down that the Steelers had not been approached by the Lions to speak with Colbert (who is under contract) that put an end to that. If the Lions were talking with him it would be a violation of League rules.

SCB Steelers Podcast 204 – Over in a Snap 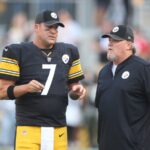