If you’ve watched any football in your life at all then you know what I’m getting at. When the quarterback goes down and doesn’t get right back up, time stops. Some even lose their breath or their heart skips a beat. I wish I were being overdramatic but I’m not and you know this. This happened yesterday when Ben Roethlisberger went down. Number seven stayed down after getting hit in the head. He is now in concussion protocol. I’m told he’s fine and this shouldn’t hinder anything as far as the regular season is concerned. This is always tough thing to see and it sounds very much like it was a case of guys just going hard in practice.

We record the Steel City Blitz Podcast Presented by 26shirts.com/Pittsburgh tonight and our special guest is former Steelers’ Public Relations Man Ryan Scarpino. He’ll give us his insights on the Steelers, what it’s like in the age of social media and much more!

For decades, #FightingBack has served as a shining example of courage, determination, and overcoming life’s toughest challenges. The new, special edition of the book is now available at https://t.co/A6TcrCUQEL. ???? pic.twitter.com/cgzjU0VNER

I often get asked if I think the Steelers are going to pay attention to the waiver wire when cuts come down September 1st. My answer is always the same. They ALWAYS monitor the waiver wire. Whether it’s cutdown day or not the front office constantly monitors the comings and goings of the other 31 NFL teams. This year, that question is related to linebackers and rightfully so.

Speaking of linebackers… Do the Steelers keep eight or nine this year? With so many defensive backs I can see a scenario where they keep eight LBs and 11 DBs. There are still three preseason games left and several practices as well so I’m not going to get too far ahead of myself. Something to consider though.

I’m giving credit to Ian for this and I think it’s spot on when discussing this Antonio Brown – Ed Bouchette squabble. First, Ed Bouchette tweeted what he saw. Second, AB was not actually hurt. And third, AB overreacted to Ed’s tweet because of some prior incidents. Personally? I think this is the best way to view this. We’ll wrap it up on the podcast tonight and then I’m moving on.

Make sure you stay up to date with Ian’s WPIAL High School Football coverage. With the Post-Gazette not doing a Saturday edition any longer, Ian is your one-stop shop for scores and analysis. 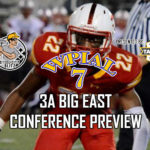