Good Monday to You Steelers’ Fans.

The last thing any fan wants to hear after a loss is “It was a really well played game…” Then there’s the ‘but.’ If you take away the officiating issues (more on that below) this was really a very good and exciting football game. The Pittsburgh Steelers played well, very well at times. But that doesn’t matter now because the Steelers’ season now hangs on a win over Cincinnati and a prayer for Cleveland to beat Baltimore. Let’s be VERY clear here; the Steelers are in this situation because of themselves. Period. End of report.

If you are blaming JuJu Smith-Schuster or if you are tweeting awful, hate-filled things at him because of his fumble then you can just stop reading now and go elsewhere. This kid works his ass off. He’s made more plays in his first two years than most guys will make in a career. He loves what he does and he’s great in the community. He was fighting for yards and he was stripped just like Stevan Ridley was. No, you can’t turn the ball over in any situation but do any of you honestly believe these guys “wanted to do this?”

Ben Roethlisberger deserved better. He was brilliant last night. From his play to his command of the game he did everything he could to get the win. Same for Antonio Brown. His best catch of the night was one that didn’t count as he reeled in a pass in the end zone with one hand. I hope you appreciate these two guys because eventually they will move on.

This is all that I’m going to say about the officiating. It was criminal. It was downright awful. It was theft. The NFL should be ashamed. There has to be a system established that punishes these guys for these horrible calls. Suspensions? Fines? Whatever. There has to be accountability.

That said, good teams overcome those things. Yes, it would have been difficult they have to find ways to fight thru the BS.

The Steelers-Bengals and Browns-Ravens have been moved to 425pm next week.

T.J. Watt is becoming a game-changer. But I also believe he needs better coaching to develop a larger variety of moves. Yes I’m looking at you Joey Porter.

I didn’t like the call on third and a long two where Stevan Ridley ultimately fumbled. The Saints are excellent up the middle and they’d already proven that in an earlier goal line series. I much would have preferred spreading them out.

As for the fake punt that turned the game around… It’s the classic either/or. If you get the first down it’s a brilliant call but if you don’t then you are fairly opened up to criticism. Here’s why I didn’t like the call. First, you’re giving Drew Brees a short field. Secondly, you’re giving he and Sean Payton the ability to control the clock. Lastly, you are immediately giving the opponent all of the momentum you’ve worked so hard to get. All that said, the D still should have saved the day if not for a very questionable pass interference call on fourth down.

At the very least play should have been stopped to review the tip. What was the hurry? The idea is to get the call right. No need to make a determination so quickly. That’s not a good look for the league.

Ray is referring to the pass interference call against Joe Haden on fourth and short. The ball looked like it may have been tipped which would have cancelled out the pass interference. Take the tipped ball question out of the equation. Did Haden get there a bit early? Yes, but for a league that demands players settle things on the field that was a very weak call. We see plays like that every, single week go uncalled. Joe Haden deserved better.

I love Roosevelt Nix. Plays hard and gives it all he has. But… please Rosie, make sure you have the first down before you make a fool of yourself man. Moments like that further the narrative that guys are more interested in celebrating and having ‘look at me moments’ than actually focusing on the task at hand.

As I stated after the loss to Oakland, I am not making any declarations about Mike Tomlin until the season is complete. I’ll leave it at that.

I’m not sure why the Steelers didn’t use Ryan Switzer or Eli Rogers a bit more from the slot. They would have had favorable matchups against Saints’ linebackers.

The Steelers’ offensive line is really good. Maybe the best in the league when it comes to pass protection. But this is not a dominant run blocking unit. They don’t line up and maul anyone which makes that third and two call that much more troubling.

Glad to see Chris Boswell perfect yesterday on his kicks. His warm-up was very shaky but he came through when he had to and I couldn’t be happier for the kid.

If you’ve played football at any level and had good coaches then you know about ‘angles of pursuit.’ Any good defense practices this and because of the limitations on practice time I doubt the Steelers spend a lot of time on it. Last night was a perfect example of how bad angles can cost yards. Sean Davis took poor angles several times costing the defense big. But he isn’t the only one. Terrell Edmunds and Joe Haden also got caught in poor positions too.

I want to welcome Greg Forbes to the SCB Crew. His first article was a review of the game published last night. Greg is from Scotland and loves the Steelers and American football in general. If he proves his worth he’ll be a full-fledged member in a month!

Have a great day Steeler Nation. Try to at least. 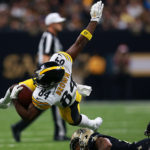